Struck by lightning bolt, he somehow survived and decided to fight back

Young Irish playwright, filmmaker, and actor's life changed after he was struck by a bolt of lightning while working in Boston in 2004. 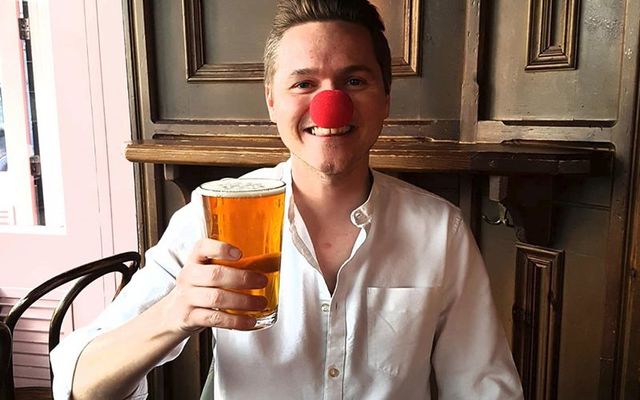 David Gilna is a young Irish playwright, filmmaker, and actor whose life was changed by a terrible event. He was struck by a bolt of lightning while working in Boston in the summer of 2004.

Gilna wrote a book and a play about the experience and has since had a movie optioned from his experience.

He took the strike as a message to get to work and live a fulfilling life. He has also directed a new one-minute (yes, that's correct) film about a young lad dreaming about running away to join the famous Irish Fossett’s circus. It played at the Galway Arts Festival one-minute film festival which had 30 entries.

Ya Clown - A David Gilna Film

He explains how the bolt from the blue changed his life forever.

“I was on a balcony on a beautiful sunny day in South Boston in 2004. I was on a J1 Visa like many past Irish students before me exploring the possibilities of ‘The American Dream’ then out of the blue I was struck by lightning. “

He was incredibly lucky; the average lightning bolt has a 1-billion-volt charge --survival is very rare.

“I was on a balcony on the third floor and I went to move a ladder.” He was afraid it would fall over because it was at an angle."

Read more: Woman gifts entire fortune to five Irish charities in her will

Literally out of the blue the lightning bolt struck a 1 in a 1.2 million chance.

“It went in through my right hand and exited on my left foot and I blanked out from the searing pain. I  just was on fire

“The world stopped, time didn't exist for that moment and I hadn't felt pain like it before in my life. The force sent my body flying backward. My heart stopped beating and for a moment I was lost between worlds.

“If I close my eyes, I can still hear that earth-shattering bang from mother nature, the smell from my burning skin.

“But the energy I felt from my Guardian Angel let me know that I was alive and survived whatever had just happened to me.

"You never forget your first breath back into this world. In what we call “the now.”

“My recovery was a mental and physical journey over years. After realizing I was actually hit by lightning I had to survive my time in the Intensive Care Unit. Eventually, I was released from The Boston Medical Centre. I started a course of rehab, working on my balance and mobility. I owe those doctors and nurses my life.

“My nervous system has been ‘altered’ each bolt of lightning can contain one billion volts. Just my wiring is slightly different to the norm now.

"I was told I may never walk again,  I would have a loss of sensitivity for life-- imagine not being able to feel someone’s touch--.with the real possibilities of going blind.

“My mother came to my rescue. It is A moment I’ll never forget. I was  with my Mother ‘Irish Mammy = Warrior’ when I was told all this bad news by my specialists

"She shut them up turned to me and asked:

-Son, are you hungry?

-Can you see me right now?

-Can you feel my hand?

-Then say a prayer to your Guardian Angels and let's say goodbye to this and the negative reviews.”

“We left the office and for the first time, I was smiling with my two crutches in hand. All this ‘what ifs’ and negative energy was gone. I’m a survivor, I survived and whatever happens, happens. But I can walk now, touch, kiss, laugh and one day love. “

A still from the "Ya Clown" by David Gilna.

But it was not all plain sailing.

“After my accident, I became a recluse, locked myself away. I pretended the accident never happened. I buried my demons.

"But a specialist gave me advice knowing my theatrical background. He said to write down all your emotions and feelings and I have never stopped writing.

"It saved me. It was my therapy, locked away with my imagination, pen, and paper. The lightning in a sense ‘sparked’ my writing career from page to stage, to tv, film and songwriting.

"I was writing for myself, deadlines or contracts and laughing with my pen and paper. It is my passion.

“What have I learned? Life changing experiences can throw a major curveball at our worldview. Suddenly everything we’ve ever known seems different. Our present experiences can even make us doubt our past memories, making us question everything. We all have a very personal view of how the world is presented to us.

“When this view is shocked out of existence our very sense of selves becomes confused and mired with ’what if’ questions such as ‘I am the same person, if not who am I now?’ and ‘Why did this happen to me’.

“Existential questions relating to the meaning of life, our sense of purpose and why we are here start crowding at the mind. Many people grow through adversity and trauma. Even though change is difficult, it can transform the person forever. They remain the same and yet very different people.

“I call it a ‘Gift’ because I was given a second chance at life. I left this planet for a short period of time and I have never forgotten the moment I took my first breath back. It felt like heaven for a moment.

"I’m rich in tapestry with my circle of trust, friendship & family. The Lightning changed my life but also gave me the greatest ‘Gift’ a second chance at life. A re-awakening.

"I’ll keep on laughing until I make it but the one thing I know I’m not in this life, is alone. Open your eyes and your mind. I don't care what people think of me. I’ll always have my Guardian Angel. My pen and paper."