The sixth annual I Love Ireland Festival and the 27th St. Patrick's Day Parade on Sunday in Tokyo with over 130,000 attending. 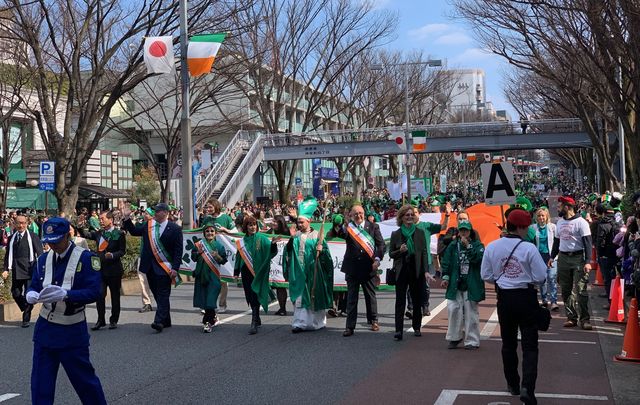 The sixth annual I Love Ireland Festival and the 27th St. Patrick's Day Parade took place on Sunday in Tokyo, Japan with over 130,000 attending. (IrishCentral writer Cahir O' Doherty was there)

Led by the Irish Minister for Culture, Heritage and the Gaeltacht Josepha Madigan and Grand Marshal Keiko Kawashima, the parade wrapped around the chic youth culture orientated Omotesando Avenue in Harajuku, an ideal shop window for modern Irish culture itself.

"This is just an incredible opportunity to represent the government of Ireland for St. Patrick's Day," Minister Madigan told IrishCentral. "Since arriving I have had many meetings here around our agri-food business and meetings in regard to strengthening our economic ties."

Ireland signed an economic partnership agreement with Japan on February 1, strengthening its links with the country, and the well attended parade and festival underlines how strong those growing ties are becoming.

"I think the Japanese people are beginning to realize that there are closer links between our two countries than they might have initially thought - and it's the same for Irish people," said Madigan. "We're both insular but open economies, we have deep cultural roots in terms of literature and art and we both love to celebrate life."

I'm in Tokyo, Japan for St. Patrick's Day 2019, where they go all out on both sides of Omotesando Avenue in Harajuku. It's a party to celebrate Ireland on an island as far from Ireland as it's possible to be. #Tokyo #東京 #StPatricksDay #セントパトリックスデー #GlobalGreening pic.twitter.com/xP7lXDVHZP

With 130,000 people attending the Minister said she hoped it has created a deeper awareness about all things Irish.

Meanwhile the diplomatic footprint in Ireland is set to expand with the building of the $40 million Ireland House in Japan's capital city.

"There's going to be significant capital investment in the flagship project which will be the Ireland House, which will integrate the IDA - and I have to put on my cultural hat and say that I'd like to see artifacts from the Chester Beatty Library brought over for an exhibition. Ireland House will be a space where the Irish Diaspora can meet and where Japanese people can learn about Ireland and our history."

"Japan, for a long time now, is the largest investor in Ireland from the Asia Pacific region. Both countries are ambitions to build that relationship and bring it to a new level," he told IrishCentral.

"The new Ireland House will be a showcase platform to project Ireland with new ambition into a higher level of relationship with Japan, the third largest economy in the world. It's an immense market, with friendly people, in a democratic country with similar values to our own."

On Sunday the well-appointed streets were a very Irish riot of craic and ceol as Tokyo looked on and celebrated a land so far away from their own - and yet so increasingly connected to it.

The parade was started in 1992 by the Irish Network Japan, with support from the Embassy of Ireland, to introduce Irish culture to the people of Japan and it is growing year by year, becoming a mainstay in the city's wider cultural life.