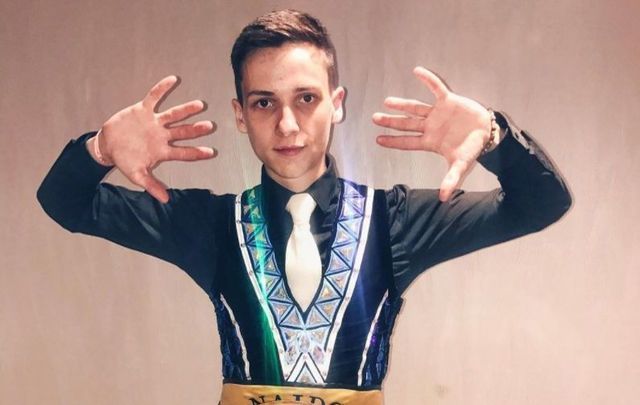 Winner of the North American Irish Dance Championships for the tenth year in a row, Irish dance superstar Owen Luebbers has a bright future ahead.

Irish dancer Owen Luebbers came to the world’s attention several years ago after he appeared on "America’s Got Talent" and after his incredible Irish dance interpretations of pop songs made him a Vine sensation. Still only 19 the Philadelphia native still has plenty to show us as he continues to bring home trophy after trophy at national competitions.

Earlier this year, the Irish dance influencer won his tenth North American Irish Dance Championship in a row, securing his future as one of the all-stars of traditional Irish dance.

For most Irish dancers competition slows down toward the end of the summer, but Luebbers, a student at Temple University in Philadelphia, will return to competition this month at the Great Britain Championships before heading to the Regional Championships again in November.

“Dancing in college is definitely challenging and requires you to push yourself a lot more, but I love having to do the work on my own,” Luebbers told IrishCentral.

“I would definitely love to dance full-time eventually! I still feel like I have more to accomplish in competition, so I'll probably be competing for a few more years.”

Luebbers' maternal great-grandparents were from Donegal and Wicklow, and, thanks to his Irish dancing talent, he has been able to make more than one trip to Ireland. Killarney is one place Luebbers always recalls.

“It was cross-country season, and I had promised my coach that I would keep training even when I was overseas for an Irish Dance competition,” he explains.

“My mom drove from the INEC [Ireland's National Events Centre in Killarney] to the Killarney National Park for me to go for a run. I ran down one of the trails that said, ‘castle,’ out of curiosity.

“Eventually that trail opened to a secluded beach. In front of me was an incredible sight. There was what looked like a mountain, off in the distance. The cool October breeze drifted in off the lake, giving me a chill I'll never forget.”

While he may feel he needs to remain competing for a few more years to push himself, Luebbers' own choreography has already won him floods of fans as he puts Irish dance steps to songs from popstars such as Ariana Grande and Macklemore.

“I would love to choreograph my own show one day!” Luebbers says.

“Irish dance choreography is something I have been passionate about for a long time and being the choreographer of my own show would give me the platform to express myself through the art form that I love. I would also love to eventually start releasing/producing music!”

Who is your favorite Irish dancer and why? Let us know all about them in the comments section below.