The annual First Irish Theatre Festival, a celebration of Irish inspired theatre and culture, is finally back with live performances this month. 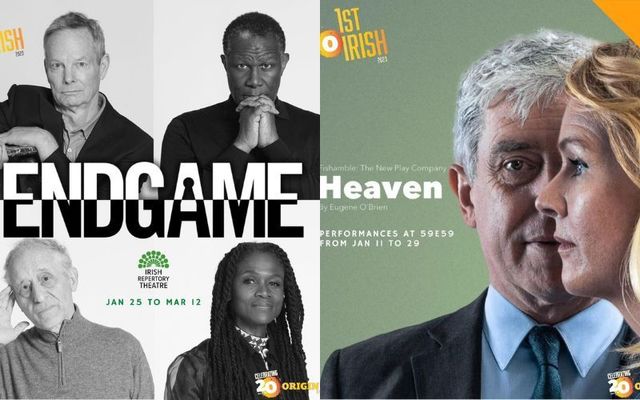 After a long pandemic led hiatus, the annual First Irish Theatre Festival is finally back on the board with live performances this month.

Theatre is a community activity, but since the pandemic, all major social gatherings including most stage productions had to be spiked. Until now.

Vaccines, masking, and basic health precautions have allowed one of the world's oldest art forms to take steps toward full recovery and no one is happier about it than Origin Theatre and First Irish Theatre Festival artistic director Michael Mellamphy.

Perhaps it's because as well as the festival director he's also a working actor who will finally get back on the Irish Repertory Theatre's stage as part of this year's showcases.

“I'm performing 'The Smuggler' by Ronan Noone and directed by Connor Bagley at the Rep,” he tells IrishCentral.  "It's a one man show I did at the First Irish Festival back in 2018 and then we were due to perform it at the Rep in April of 2020, but something happened around that time, I can't remember quite what it was...”

Like everyone else, Mellamphy was forced to put the play and indeed his own career on the shelf for an extended period and this marks the first full return to live productions for the long-running festival, which is now in its fifteenth year.

Origin Theatre is a is an artist led company now, Mellamphy reminds me. “I think the best way to lead is to allow the artist to get up and do their thing as well.”

Combining theory and practice, he will lead the festival and star in this verse play from January 18 to February 26 addressing very timely themes: immigration, human trafficking, and the sometimes deeply dehumanizing way that people here can talk about such things.

“I think this is very relevant, not just for America, but for what's happening across the world right now with the splintering of views and ideas, and you know, a lot of the reactionary politics that we've had.”

The play is set in an imaginary area called Amity, which is very heavily rooted in in New England and Martha's Vineyard,” Mellamphy explains. If that rings a bell it's because that was were the real life Florida Governor Ron DeSantis cruelly shipped some unsuspecting immigrants in the hope they would be rejected instead of embraced.

“Like you, I'm an immigrant to this country. But there is a certain kind of a hierarchy, depending on where you're from, and what language you speak, and how much melanin you have in your skin. The play takes on a lot of these in a very provocative and very Irish cheeky way. I'm very excited to stage it, you know?”

The festival opener will be provided by Dublin's acclaimed Fishamble Theatre Company. “They are bringing over a wonderful new show by the Rooney prize-winning writer Eugene O'Brien, called Heaven beginning on January 11 and directed by Jim Culleton, who is an Irish Times Best Director award winner.

Set in County Offaly during the weekend of a local wedding, guests Mairead and Mal (Andrew Bennett and Janet Moran) are struggling to keep their marriage together. In the hope that attending a wedding will help, or raise questions that are difficult to answer, Heaven looks at family bonds, life decisions, and the ever elusive search for happiness in contemporary Ireland.

“Meanwhile we have encouraged Big Telly Theatre Company from Northern Ireland to make their first foray over here into the United States, performing for First Irish,” Mellamphy says.

“They're pioneers of very immersive site specific type of theater and they're bringing us the New York premiere of their acclaimed, immersive take on the classic Frankenstein story called 'Frankenstein's Monster Is Drunk,' which is based on an award-winning short story by Owen Booth. It will play at 59 East 59 Theatre from January 11 until the 28.

Herself by the noted Irish American playwright, poet, and performer Tim McGillicuddy is a dark and sometimes comic look into the destructive power of gossip that's set in a haunted pub where a young woman returns to her hometown (following the death of her brother) to confront and try to transform the rumors of the past. The play will have a dramatic reading at the New York Irish Center in Long Island City on January 11 at 7 PM, tickets are $5.00.

'It's In The Play' by Orlagh Cassidy and Kate Lardner is an intimate reconstruction of the puzzle of a fractured family’s story that explores memory, loss, and love in a manner both heartbreaking and humorous from January 20 through January at The Cell theatre in Chelsea.

'The Funny Thing About Death' by Kim Kalish is an Edinburgh Fringe sensation, which sold out a 5-star run in August. The award-winning sketch performer, improviser and storyteller is an Upright Citizens Brigade alum and a Conan O’Brien regular.

The show takes us through Kalish’s grief after losing the love of her life at just 23 years of age. Steeped in the agony of lost love, and that all too human condition of grieving, the play reminds us it’s okay to not be okay because that’s the funny thing about death. The show runs in repertory from January 20 – 29 at The Cell.

'Dublin Noir' by Honor Molloy will be presented in association with Irish American Writers and Artists (IAW&A). Set in August 1939 as Europe is on the eve war, Ireland has decided to have none of it.

On a day trip to Drogheda, Dubliner Tadgh Steele is captured by a dairy farmer named Murphy and locked in a cowshed. Is Tadgh a poet as he claims or as Murphy suspects a Nazi spy? Come to the Irish Arts Center for the reading of this new play by the award-winning playwright on January 29 at 3 PM.

'Peace and Love In Brooklyn' commands interest for being that very rare thing, an Irish musical. “It's on for one night only on January 28 at 7 PM on the main stage of the Irish Arts Center, who we're really partnering up with this year in a big way,” says Mellamphy.

Written by Eamon O'Tuama, an Irish writer based in Queens, it's a story about a young musical prodigy born to a couple who had a little fling back in the early 70's. “Father and son have never met until one night when the mother hums a melody she has carried for years. A musical thread unravels and a 30-year journey begins in Brooklyn.”

Other festival highlights include a very special staged reading of the play 'Brigid' by Maura Mulligan, featuring songs from the Grammy-winning vocalist Susan McKeown and then a Brigid's Eve talk back at the New York Irish Center.

'Those Who Pass You On The Streets' stars John Duddy, Labhaoise Magee, and Ciaran Byrne (who also directs) is Laurence McKeown’s new work about an RUC widow who walks into a Sinn Fein office seeking assistance with the anti-social behavior in her area.

An unlikely friendship with community officer Frank begins, challenging their pre-conceptions and beliefs, as well as family and political loyalties. The reading runs on January 29 at the Irish Arts Center at 7 PM.

For a full list of performance times, venues and tickets visit origintheatre.org.