The Donegal Taj Mahal - The Old Church of Dunlewey

The Old Church of Dunlewey in Co Donegal is a lasting memorial to a great love affair. 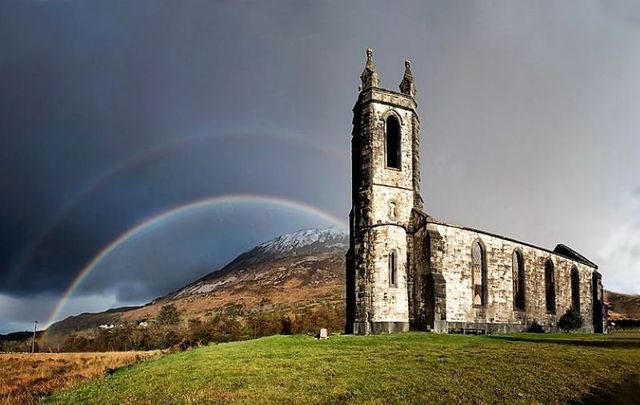 The Old Church of Dunlewey in Co Donegal, much like the Taj Mahal, is a lasting memorial to a great love affair.

200 years after the Taj Mahal, one of the 7 wonders of the world which was commissioned in 1632 by the Mughal emperor Shah Jahan to house the tomb of his favourite wife Mumtaz Mahal, a woman erected her own monument to devotion, love, and loss in Co Donegal.

Lying silently at the foot of Mount Errigal, the tallest of the Derryveagh Mountain range and the largest in Donegal, is the stunning ruin of the Old Church of Dunlewey. A beautiful building which is a lasting memorial to a great love affair between James Russell, the landlord of the Dunlewey estate, and his wife Jane.

James Russell married Jane Smith in 1825 and they set up married life in London. James would go on to make a fortune as a hop merchant. The couple were blessed with five daughters: Fannie, Henrietta, Emma, Louisa Sarah, and Josephine.

Using the wealth they had acquired in London, the couple decided to leave England and purchase the Dunlewey estate, an area of sheep, lakes and outstanding natural beauty with the wild Atlantic to the west and the Derryveagh Mountains to the East.

The estate is recorded as consisting of a house, outbuildings, gate lodges and 3825 acres of land, a large holding by the standards of the day.

Little is written of their time in Dunlewey, but James died on the 2nd of September 1848. Heartbroken, his widow decided to build the church as a monument for her husband.

Like the Taj Mahal, the Church of Ireland building was constructed using white marble and also blue quartzite which was quarried locally.

The supply of marble in the nearby quarry has now been depleted. The red brick in the arches of the windows was produced locally. Remnants of the brickfield are still visible near Oilean Ghrainne when the level of the lake is lowered.

James Russell was laid to rest in a vault under the church floor. 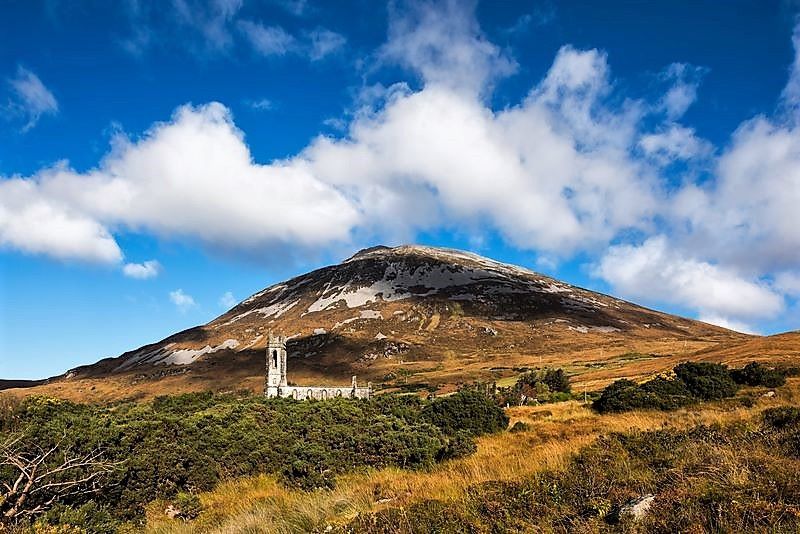 Folklore and The Old Church of Dunlewey

On the 1st of September 1853, the Church was consecrated as a chapel of Ease to the Church of Ireland in Tullaghbegley which was the parish consisting of the modern-day parishes of Gweedore and Cloughaneely.

The church is nestled in the valley between Errigal and the Poison Glen, an area of stunning beauty and with a long history.

One other reason could be that the Poisoned Glen owes its name to the former presence of the highly toxic Irish Spurge Moss. It is rumoured that the plant poisoned the drinking water and thankfully the Spurge Moss is now extinct here.

I prefer to think folklore has given the glen its ominous name. The story from lore is that the one-eyed king of Tory, Balor of the evil eye, had a beautiful daughter Ethniu who he kept closed away in a tower out of men’s view.

This was because he had been forewarned that only his grandson could end his life.

However, word of her beauty spread and she was kidnapped and brought to the nearby mainland at Magheroarty.

Balor in a fury followed and caught up with her kidnappers at the entrance to the glen. He rescued his daughter and killed her kidnapper with a giant stone.

To this day one such stone stands in the glen and is said by locals to be the poisoned eye of Balor who has given his name to the glen where the old church of Dunlewey now lies.

The deterioration and restoration of The Old Church of Dunlewey

With emigration and the decline in the Dunlewey estate, the population eroded as did the congregation of the Dunlewey church. Gradually neglect and the elements took their toll.

In 1955, the roof had deteriorated to such an extent that it was decided to remove it as a safety measure. The fixtures and fitting of the church were distributed to other churches throughout the Church of Ireland diocese of Derry and Raphoe. The bell was also removed and is now installed in the Cashel Church of Ireland near Doe Castle.

In 1987, the local community restored the floor. In 2005, half a century after the roof was removed, restoration work was undertaken to ensure that this beautiful and historic landmark was preserved for future generations.

The poignancy of the church did not end with the grief of Jane Russell. Another landlord of the estate, Richard Lewis Crankshaw who died on the 29th of November 1929, is buried on the grounds of the Old Church of Dunlewey without his wife.

His widow Nellie was a Roman Catholic and when she died in 1946 she was buried in the graveyard of the Sacred Heart church which lies just across the lake in sight of the Old Church.

If you visit the Sacred Heart church you will see one gravestone turned towards the Old Church of Dunlewey - that’s Mary Crankshaw who wished to be buried in sight of her husband facing his grave. The other headstones point away from the Old Church.

So when you are in the Goath Diobhair area make sure to visit the Donegal Taj Mahal, a monument to love and loss, the Old Church of Dunlewey.

Take a closer look at the Old Church of Dunlewey here:

Have you ever visited The Old Church of Dunlewey in Co Donegal? Tell us about it in the comments!