Irish artist Matt Loughrey edited smiles onto the faces of some Cambodian torture victims that were featured in a recent article for Vice. 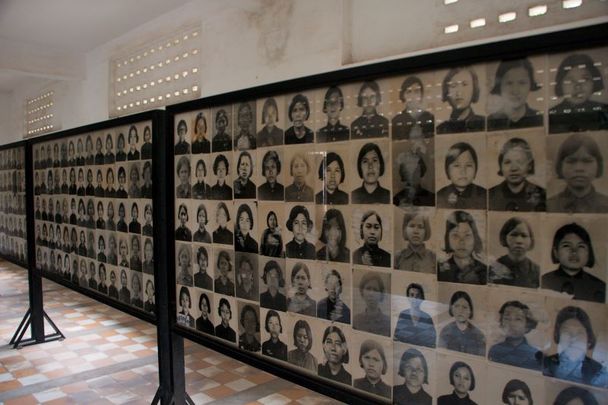 Photos of Security Prison 21 (S-21) prisoners that are now housed at The Tuol Sleng Genocide Museum in Phnom Penh, the capital of Cambodia. Christian Haugen, Flickr / (CC BY 2.0)

Matt Loughrey, the Irish artist behind My Colorful Past, is facing heated criticism since the publication, and the ultimate retraction of, an article for Vice that featured his edited photos of prisoners from Tuol Sleng prison in Cambodia.

Located in Phnom Penh, Cambodia, Tuol Seng was used as Security Prison 21 (S-21) between 1976 and 1979 under the Khmer Rouge routine. It is estimated that some 18,000 people were tortured and killed in the prison during that period. The site is now home to the Tuol Sleng Genocide Museum, which displays the photos that were taken of the prisoners upon their intake.

Loughrey is accused of editing the historic photographs of prisoners to include smiling expressions for the Vice article.

According to The New York Times, Loughrey said in the now-retracted Vice article that his editing of the historic photos was meant to “humanize the tragedy.” Reuters notes that the Vice article did not include the original photographs of the prisoners.

On April 10, the day after the Vice article was published, Belgium-based photojournalist John Vink called Loughrey out on Twitter for his edits on the historic photos:

Matt Loughrey in Vice is not colourising S21 photographs. He is falsifying history: pic.twitter.com/z6J99J7BOE

Vink’s tweet was liked more than 15.3k times in less than five days. Amongst the many replies, one person linked to the Tuol Sleng Genocide Museum’s archives, where the original photographs can be viewed.

On April 11, Cambodia’s Ministry of Culture and Fine Arts (MCFA) issued a statement that said Loughrey's work “seriously affects the dignity of the victims, the reality of Cambodia’s history, and [is] in violation of the rights of the [Tuol Sleng] Museum as the lawful owners and custodians of these photographs.”

Noting that it had not been in prior communication with Laughrey, the MCFA urged Vice and Loughrey to “remove these images from their media.” The ministry said it would consider legal action if needed.

The same day the MCFA issued its statement, Vice issued this statement: “On Friday, April 9th, VICE Asia published an interview with Matt Loughrey, an artist working to restore and colorize images from Security Prison 21 in Phnom Penh, Cambodia, which was used by the Khmer Rouge regime from 1975 until its fall in 1979.

“The article included photographs of Khmer Rouge victims that Loughrey manipulated beyond colorization.

“The story did not meet the editorial standards of VICE and has been removed. We regret the error and will investigate how this failure of the editorial process occurred.”

While Vice has removed the article, an online petition launched on April 11 continues to circulate demanding an apology from both Vice and Loughrey. At the time of publication, the petition had gained more than 3.3k signatures.

The petition says in part: "Cambodian communities across the globe are deeply offended by the non-consented use of the photos, but furthermore with how Mr. Loughrey has since dismissed our concerns with falsified stories perpetrated by these photographic manipulations.

"When contacted about the sensitive nature of the publication, Mr. Loughrey's reply was: 'This is invaluable feedback. I will be sure to run all future projects by you for moral and technical discovery.'"

(Editorial Note: In March 2021, IrishCentral ran this article about Matt Loughrey and his My Colorful Past project. IrishCentral at the time was unaware of his editing of photos beyond colorization and animation.)