"Late Afternoon," now available from the Irish Film Institute, is a delicate rendering of an elderly Irish woman's experience with dementia. 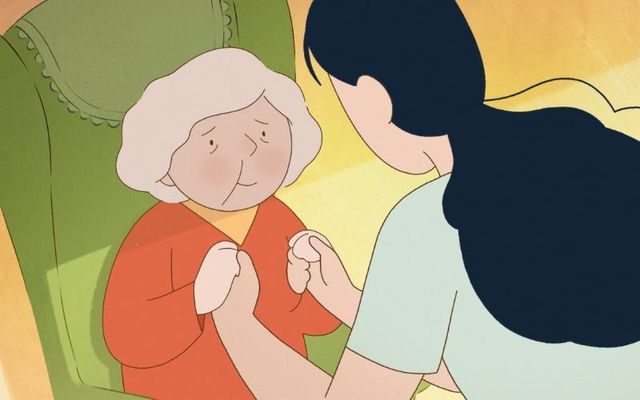 The Irish short film "Late Afternoon" was nominated for an Oscar in 2019. Irish Film Institute

In this delicately rendered animation, Emily, an elderly woman with dementia, vividly relives her memories.

Sitting comfortably in her armchair, Emily (voiced by Fionnula Flanagan) takes a cup of tea and a biscuit when a simple mishap triggers a pleasant journey into the past. She swims through the memories of being a child on a beach, a young woman in a lover’s embrace , and a young mother concerned for her little girl.

Inspired by writer/director Louise Bagnall’s two grandmothers, this is a poignant celebration of ordinary lives.

"Late Afternoon" is part of the IFI's F-Rated: Short Films by Irish Women collection. To view more from the collection, click here.

Having been nominated for an Academy Award® for Best Animation Short in 2019, "Late Afternoon" is also part of the IFI's The Oscar® Collection: A Selection of Irish Academy Award® Nominated Short Films.

About The Oscar® Collection at the Irish Film Institute

A great short film, like a great short story, conjures worlds with clarity and economy, bringing viewers on journeys that are brief but deeply engrossing. Since the 1950s, Irish filmmakers have mastered the short film form and secured international recognition with an impressive array of awards including many Academy Award® nominations and victories. Popularly known as the Oscars, the awards are the most famous and prestigious in the entertainment industry.

This collection brings together a selection of these award-winning films – ghostly tales and pitch-black comedies, illuminating documentaries and exquisite animations – populated by an array of famous folks such as Seán O’Casey, Orson Welles, Fionnula Flanagan, and Brendan Gleeson. The films, directed and written by Irish men and women, date from 1951 to 2018.

The Oscar® Collection: A Selection of Irish Academy Award® Nominated Short Films is drawn from material preserved in the IFI Irish Film Archive.

This programme is supported by the Government of Ireland through the National BCP Network.

"Late Afternoon" is published here with thanks to the Irish Film Institute (IFI), who IrishCentral has partnered up with throughout 2022 to bring you a taste of what their remarkable collection entails. You can find all IrishCentral articles and videos from the IFI here.