The Women's World Cup is set to kick off on Friday, June 7, and Kelley O'Hara is the closest thing Ireland has to representation at the showpiece event in France. 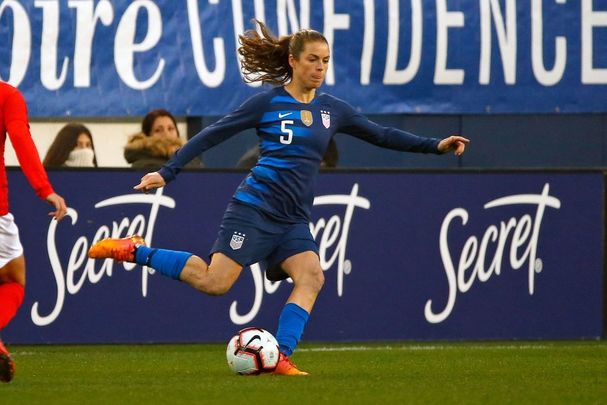 Kelley O'Hara #5 of the USA plays in the 2019 SheBelieves Cup match between USA and England at Nissan Stadium on March 2, 2019, in Nashville, Tennessee. Frederick Breedon/Getty Images

The Women's World Cup is set to kick off on Friday, June 7, and Kelley O'Hara is the closest thing Ireland has to representation at the showpiece event in France.

Having failed to qualify for every Women’s World Cup since the tournament’s inception, Irish fans have had precious little to cheer about on the biggest stage of women’s international football.

With no team to get behind, Irish supporters are forced to look further afield to find a vested interest in the tournament and they should look no further than the USA’s Kelley O’Hara.

O’Hara, as the name suggests, is of Irish descent and has been a pivotal member of the USA squad that has reached the highest peaks in women’s international football over the last decade.

We want every person to feel like they're part of the #USWNT this summer, and we want to make sure EVERYONE gets our jokes, traditions & nicknames.

An Olympic gold medallist and World Cup winner, O’Hara initially began her career as a forward but has converted to full back in order to burrow her way into the American national team.

The Utah Royals player missed each of the USA’s first four games in 2015’s World Cup but gradually rose to prominence as the tournament progressed, scoring one of her two international goals in the semi-final win over Germany. O’Hara featured as a substitute in the final as the US thrashed Japan 5-2 to land a record third Women’s World Cup.

As joint favorites for this year’s tournament in France, the USA boast an excellent chance of winning a record fourth Women’s World Cup which would give O’Hara her second World Cup medal in an illustrious career.

Described as fiery by American reporters during the 2015 World Cup, O’Hara doesn’t lack for commitment and will make the full-back berth her own if she gets the nod to start.

With such a dearth of Irish interest at the Women’s World Cup historically, it would represent progress for the game at home if fans were to get behind the next best thing to an Irish player – an Irish American one.

Who do you think will win the Women's World Cup? Let us know below.