The woman who was reincarnated to find her Irish children

Jenny Cockell become famous in the 1990s for her reincarnation story, which saw her travel to Ireland to meet those she believed to be her children in a past life. 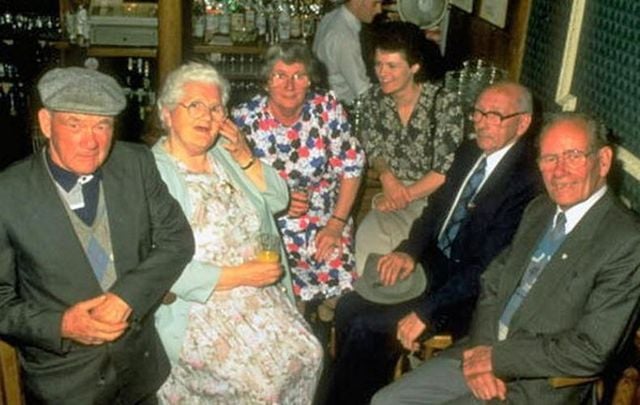 Jenny Cockell with the Irish people she believes to have been her children in a past life.

English woman Jenny Cockell has written several book on her Irish past life.

Do you believe in reincarnation? The concept has not much been discussed in Ireland in the last few centuries what with the disdain that the Catholic Church has for the idea but the concept of finishing one life and starting another in another physical body is one of the world’s most ancient and may even have been a theory floated around by the Celtic druids at one point.

Regardless of your own thoughts on reincarnation, the story of Jenny Cockell is an intriguing one; an English woman traveling to Ireland based on memories she believed she’d had since she was a small child, convinced that she was the reincarnation of Dubliner Mary Sutton and had children still living in Ireland.

Cockell enjoyed a certain level of fame in the 1990s when she took part in the BBC show “Strange but True,” speaking about her experience of coming to terms with the fact that the feelings she’d had all her life may, in fact, be memories and emotions from a past life. She then decided to track down her hometown in Ireland and ultimately, met with the now elderly men and woman who she believes to be her children, despite the fact that they are decades older than her.

Read more: Did our ancient Irish ancestors believe in reincarnation?

Jenny Cockell has a bizarre story of reincarnation.

The English woman claims that even before the age of four, she felt that she had previously been called Mary and appeared to vividly remember the details of her death in the 1930s. She believed she had died in hospital while giving birth to her eighth child aged just 35.

Cockell has written in depth of the feelings of guilt she felt from this young age in knowing that she was leaving her children behind and as soon as she could pick up a pencil, she was drawing up a map of the place where she believed  she used to live, knowing deep down that it was in Ireland.

"I started talking about these memories before I turned four and I thought it was what everyone experienced," Cockell has said.

"I had tiny fragments of dozens and dozens of memories but there were four past lives that came through the strongest and the memories of Mary were the strongest ones of all.

"I remembered feeling so upset and guilty at leaving the children. There was this sense of wanting to see what had happened to them and make sure they were alright."

Cockell has penned several books on her reincarnation story.

It wasn’t until she herself was married with children that Cockell decided to explore these supposed memories further, still skeptical of what they may be, despite the fact that she had spoken of them throughout her life. With the help of a hypnotist she became to look back further and began to believe that she truly was the reincarnation of Mary, making the decision to travel to Ireland in 1989 to find out more first-hand information.

She claims to have instantly felt a connection, remembering things about Malahide - the suburb of North Dublin she felt most resembled the maps she drew from her memories - that someone who had never before stepped foot in the place should know.

"I noticed things that had changed -- like the builder's yard being replaced by a supermarket and the old jetty being updated to a nice new concrete jetty," she told the Irish Independent in 2009.

"I knew the house was grouped with a few other houses, opposite a boggy meadow. When I walked to where I thought the house was, there were just ruins there. I had got there just in time because the ruins were only there for a short time afterwards until a development was built on the land."

Read more: Wise message from the past in an ever changing world

Does Jenny Cockell really remember her past life?

She had made it this far but was still unaware of what her previous surname had been, only believing that she had been called Mary and lived in Malahide in the 1930s, dying a full 21 years before her current life had started.

By connecting with the locals, she found a man who remembered the family who had lived in the ruined cottages and established that she had been named Mary Sutton. Now she was able to start the quest to find the children she believed she had orphaned, feeling all but certain that she had tracked down the right family and eager to reach out to them on behalf of Mary Sutton.

"I did worry for a long time about contacting Mary's children," Cockell said.

"I was concerned that by approaching them, it might do some harm. But ultimately I thought I would make contact and leave the decision to them on whether they wanted to talk to me."

Putting an ad in Irish newspapers, she was contacted by John, who she thought was one of her children, and he, in turn, put her in touch with his brother Sonny who was living in England. It was at this point that the BBC show “Strange but True” got involved, deciding to interview Sonny and Jenny separately first regarding their memories of Mary Sutton and establish how well they matched up.

“There were nine pages of information that matched with Sonny," Cockwell states.

"It was important that there was independent research by a third party but for me, this was less about proving reincarnation than it was about finding what had happened to the family."

As well as Sonny, Christy, 72; Frank, 70; Phyllis who was 71; Betty Keogh, 62; and their brother Jeffrey James, who died in 1992 aged 66, were still living among the siblings and while Sonny accepted that Cockwell was the reincarnation of his mother after the BBC interview, several of the others were quite skeptical. They were mostly willing to accept, however, that it was at least their mother sending a message through Cockell in an attempt to bring them back together after the young family was separated and sent to live with different family members or adopted after their mother’s death.

"Sonny accepted me as Mary, mostly because there were things that I knew that he said, 'How can you know that?' she said

"Some of the girls couldn't quite see it as reincarnation and I said they didn't have to look at it that way. I think, instead, they saw it as their mother working through me."

Not everyone has accepted that reincarnation is the correct answer to Cockwell’s experience, however. Researcher and prominent investigator of the paranormal Joe Nickell has claimed that her story breaks down under analysis and that much of her memories are fantasies, while Chris French, a professor who studies the psychology of paranormal belief, believes that she has simply added to her own research of the family to  create a life around the story.

"I don't really need to respond to those criticisms," Cockell argues.

"I can only explain what happened to me.

"I grew up with people telling me that what I was quite sure was real wasn't real and I wouldn't want to do that to other people. I understand skeptics are uncomfortable with the idea of reincarnation but they haven't experienced what I have.

"It feels lovely now that I have re-traced more about my past lives through writing the book. I've found out answers to things that seemed unresolved in my mind. While a lot of the memories are still there if I want to access them, I feel at last that I'm able to live my own life more fully."

The English woman has already published four books on her past and future lives including “Yesterday's Children” exploring her quest for her lost Irish children.

Do you believe in reincarnation or is the past life simply a story in Cockell's imagination? Let us know you thoughts on reincarnation and past and future lives in the comments section, below.