Jaylin Chu is playing some of his favorite Irish tunes on traditional Chinese instruments in a bid to simultaneously promote Irish and Chinese culture. 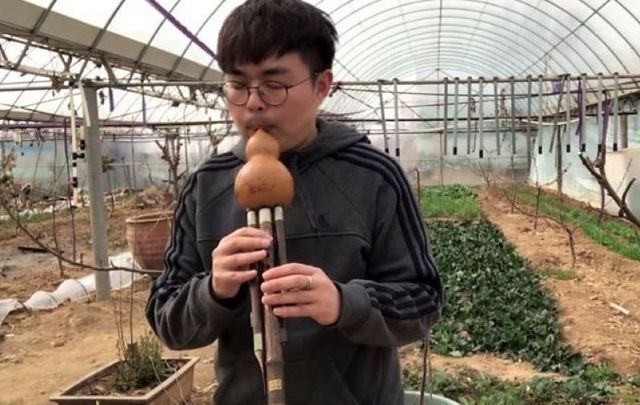 A Chinese musician has put a new spin on Irish music by playing some of Ireland's favorite trad songs on traditional Chinese instruments.

Jaylin Chu has always had an interest in Irish music but found it very difficult to get his hands on any Irish instruments while living in Beijing.

Chu was not to be deterred, however, and he began exploring alternatives to overcome this particular roadblock.

Chu, who studied Irish music at the University of Limerick for a year in 2019, began experimenting with Chinese wind instruments such as the dizi, hulusi, xiao, and soon discovered his niche.

He was surprised by how natural Irish music sounded when he played a few "jigs and reels" on the hulusi and uploaded it onto social media, where it has taken off over the past few months.

His performance of the "Bucks of Oranmore" was picked up by the Dust-to-Digital Twitter page - a music research account with more than 200,000 followers - and his video has generated more than 340,000 views and 16,000 likes.

Jaylin Chu is a musician from eastern China. In 2019, he moved to Limerick, Ireland to study Irish music. Here he is earlier this month performing “Bucks of Oranmore” on the Chinese instrument, the Hulusi. pic.twitter.com/Ci6bWgQ6JX

"It surprised me that so many people liked to watch me playing Irish music on the hulusi," Chu told IrishCentral. "Most of the viewers were Irish or Irish music lovers, but many of them hadn’t listened to much Irish music before at all.

"I’m very happy that I might promote both Irish culture and Chinese culture to new people. The two cultures I love the most in the world."

Chu explained that the "Bucks of Oranmore" is one of his favorite Irish songs to perform on the hulusi as it brings back fond memories of his time in the town of Oranmore in 2019.

"I spent Christmas in Oranmore with a friend's family. I miss this experience very much." Chu said. "On Christmas morning, I went swimming in the bay of Oranmore with local people. It's a local tradition. I feel like a real buck of Oranmore now."

Chu explained that it is not always easy to adapt traditional Irish music to Chinese instruments and said that he carefully selects instruments that suit the personality of the song that he is performing. He also said that Irish music differs slightly from Chinese music in terms of tone.

Foggy Dew in China😆😆 Played in my parents' greenhouse. Anyone who's interested in buying a hulusi can leave your email in commons. Once i found good makers, i may send you a message. Good luck for you all!!

Whereas traditional Chinese music tends to be very sad or very happy, Chu found that traditional Irish music is a cacophony of differing emotions. He observed that sad songs had happy elements and happy songs had sad elements, forcing him to select the Chinese instruments that best reflected these conflicting emotions.

Chu fell in love with Irish music after seeing a performance of Riverdance and he is currently learning traditional Irish music on the flute and tin whistle, while he also plans to continue recording music on the hulusi. He said that he will teach Irish music through Chinese as part of his career and hopes to promote Irish music in China with his videos.