No Irish Need Apply? Not anymore

The perseverance and strength of emigrants – like the Irish had in the days of 'No Irish Need Apply' – inspired the new Beauty of Blend campaign from Tullamore D.E.W. Irish whiskey. 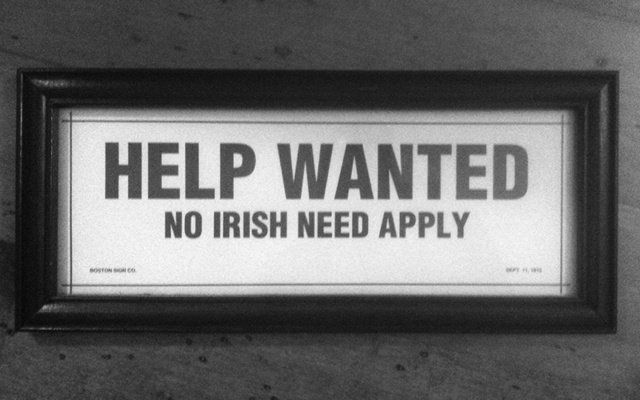 Illustration for the song No Irish Need Apply

The days of "No Irish Need Apply" were a dark chapter in the journey of the Irish in America.

From the 1840s and 50s, when the Irish arrived in America by the hundreds of thousands, fleeing the devastation of the Great Irish Famine, to the turn of the century, discriminatory ads and job listings were commonplace throughout the United States.

"No Irish or Catholics wanted," some read. "Positively no Irish or Jews need apply," others declared.

As we now know, in spite of these challenges the Irish were able to set down roots and forever change the course of American history, with Irish immigrants and their descendants building skyscrapers and digging subway tunnels; becoming Hollywood icons like Philadelphia-born Grace Kelly, captains of industry like Chicago-born Walt Disney, and even presidents of the United States.

Tullamore D.E.W., the world’s second largest Irish whiskey, has launched a stunning new campaign inspired by the amazing journey of Irish emigrants in America, the struggles of the days of 'No Irish Need Apply', and the strong, diverse communities that have been forged since then.

One of the brilliant new ads in the Beauty of Blend campaign harkens back to the days of No Irish Need Apply when Irish immigrants to America faced discrimination in housing and employment as they attempted to build new lives.

The short film centers on an Irish bartender who keeps a No Irish Need Apply sign behind the bar as a reminder of how far the Irish have come.

“No Irish Need Apply,” he says, ruefully shaking his head before launching into a powerful monologue.

“Who built the bridges?” he asks, as the Brooklyn Bridge comes into focus outside the window. “Scraped the city skies? And bled with your sons?”

“Blend is the backbone of this place,” he declares.

“I am blend. So are you, and you, and that other fella, too. We are all blend, from the beginning to the end.”

Then they raise their glasses and toast to the beauty of blend.

The campaign was created by New York agency Opperman Weiss, with the No Irish Need Apply ad and another film set to the Irish air Danny Boy both directed by award-winning filmmaker Laurence Dunmore. Tullamore D.E.W. previously worked with Opperman Weiss and Dunmore on their award-winning 2013 ad set to the song The Parting Glass, which Creative Online hailed as “The envy of other booze ads."

This time around, Tullamore D.E.W. decided to focus on the Irish emigrant story because of how integral it is to the global success of Irish whiskey and of Tullamore itself. The distillery first opened its doors in 1829 in Tullamore, Co. Offaly, reaching new levels of success when the fortuitously initialed Daniel E. Williams worked his way up from a stable boy to the owner. But it was emigrants who helped it grow to become a global powerhouse - currently the world’s second largest Irish whiskey brand, selling 1.1 million cases annually.

“Irish whiskey in 1800s-1900s couldn't have been dependent on the Irish market because the population was too small," Global Brand Ambassador John Quinn explained. “So instead it followed its emigrants around the world. Irish emigration is part of our DNA.”

So much so, he explained, that when Tullamore D.E.W., - which is now owned by William Grant & Sons - was acquired by John Powers & Son in the 1960s, it was strategically decided that Tullamore D.E.W.’s focus would be the export market.

“As a brand, we wouldn't be here today if it wasn't for Irish emigration,” agreed Caspar MacRae, Tullamore D.E.W.’s Global Brand Director. “Where they moved they took their love of Irish whiskey and we grew as a brand, meeting the demand of emigrants around the world.”

He explained that for this campaign, Tullamore D.E.W. had been interested in exploring “the social history of Ireland and Irishness around the world. Opperman Weiss came up with this proposal, and it drew a parallel with what happened historically, what people go through today, and the benefits emigration can bring. It's a heartfelt reminder.”

That spirit is also embodied in Tullamore D.E.W.’s signature triple blend, a triple distilled blend of all three types of Irish whiskey – grain, malt, and pot still. The sweet softness of grain whiskey, the light spice from the pot still, and the fruitiness of the malt come together to create a unique of flavor that makes Tullamore D.E.W. stand out among Irish whiskeys.

For MacRae, this also gets at the essence of what sets Irish whiskey - and Tullamore D.E.W. in particular - apart from all other whiskeys and scotches.

“There's a big difference in how whiskey is enjoyed in Scotland and in Ireland,” he said. “Single malt is about exclusivity, solitude, connoisseurship, whereas Irish whiskey has a much more social history and present.

"It’s about the local community, the pub culture, great conversation, and bringing people together.”

This post is proudly produced in partnership with Tullamore D.E.W. Find out more on IAmBlend.com