The fates aligned to bring these two Americans together on a rainy Galway afternoon. 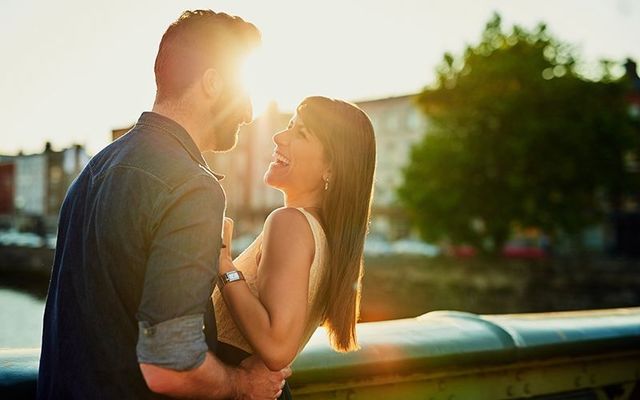 In the run to Saint Valentine's Day, we're indulging our gushy side and reveling in beautiful Irish loves stories such as these two IrishCentral readers whose stars collided in 2008 during their trips to Dublin! Comhghairdeas!

In 2008, Kari, an Irish dancer from California, graduated college from the University of California, Santa Barbara (UCSB). Like many college graduates, Kari had no idea what she wanted to do with her life. So, she thought, why not live in Ireland and have the adventure of a lifetime! In September of 2008, Kari landed in Dublin with a four- month paid internship and a room to rent from her Irish cousins.

Around the same time, Carlos, a Chicago-born soldier in the U.S. Army, was in the middle of a 15 month tour of Iraq. When given the opportunity to take his three week leave from Iraq, unlike most soldiers who visit their families at home, Carlos decided he wanted to visit the one place he'd always dreamed of: Ireland. When Carlos called to tell his mom that he wasn't coming home, but instead visiting Ireland, she said, "I'm coming with you!" In October of 2008, Carlos met his mom, Tina, and his brother, Ricky, in Ireland.

Kari's goal during her four-month stay was to travel around Ireland and Britain too. She had made some great friends and gotten to know her cousins very well, but she couldn't quite find a travel partner for every weekend trip that she planned. That didn't stop her though, so she planned to just go alone on some of her trips. On a rainy weekend in October, Kari rode the bus across Ireland to the coastal city of Galway.

Carlos had a great time touring with his mom and brother, seeing Dublin, western, and southern Ireland. However, Carlos' mom and brother could stay only for two weeks of Carlos' three-week leave. The day after he said good-bye to them in Dublin, he decided to hop on the train across Ireland to Galway.

On Sunday, October 19, 2008, the fates aligned, and thanks to the notorious Irish weather, the Kari and Carlos story begins. Kari had made some friends in her hostel and decided to walk with them to the train station in Galway to see them off. It started to pour and Kari quickly said her goodbyes in the streets and ran to the nearest shelter, an Irish pub. Carlos had decided to take a day of rest after traveling for two weeks with his family and needed to do some laundry. While asking his hotel where to find a laundromat, he learned that you pay the hotel to do the laundry for you. With the extra time, he figured he'd find the nearest pub to read his book and enjoy a cup of coffee.

After finishing one of her favorite Irish dishes, the "traditional Irish breakfast," Kari asked her waiter if she should pay at the bar or with him. Her American accent caught Carlos' attention and he turned to her and asked her where she was from in America. To this day, Carlos will say that Kari was wearing a top that sparkled, though she was simply wearing a black knitted sweater. He was instantly drawn to her, and she to him. Their conversation continued briefly, and as they were about to part ways, Carlos bravely asked Kari, "Can I see you again?" Kari, pleased by his question, said, "Yes." And so it began...

Although they made plans to meet for lunch in a few hours, they accidentally ran into each other again on the streets of Galway and found out that, coincidentally, they were both looking for the same shop, the original Claddagh ring jeweler. They ended up shopping together, each buying a Claddagh ring souvenir.

Over their lunch, they got to know each other some more and decided to meet again in Dublin later that week. Carlos planned a date of dinner and a Flamenco dancing show, which Kari loved (since she's an Irish dancer and loves dance). At the end of their date, Carlos mentioned that the coming weekend was his last weekend before he flew back to Iraq. Unfortunately, Kari had plans already to visit Wales for the weekend; however, as before, she was traveling alone. On a whim, and acting with her gut, Kari daringly asked Carlos if he wanted to travel with her to Wales for the weekend. Carlos didn't hesitate to accept.

Read more: Where to meet the love of your life in Ireland this St. Valentine's Day

They enjoyed a wonderful (and rainy) weekend in Wales, touring a medieval castle and venturing up the mountains of Wales (pictured above). When they returned to Ireland, Carlos had to leave the next day for Iraq, and they were both very sad their week together was over.

Thanks to the internet, skype, and the telephone, Carlos became what Kari thought of as her "soldier at war," and they stayed in touch almost daily. They got to know each other so well that 8 months later when Carlos was out of the Army, he decided to move to California for the girl of his dreams.

On October 19, 2013, on the five year anniversary of the day they met in Ireland, Kari and Carlos tied the knot and married on the sunny coast of California in Santa Cruz.

Do you have an Irish love story you'd like to share with IrishCentral ahead of St. Valentine's Day? You can sign up to be a contributor on IrishCentral and submit your story.