WATCH: Meet the Irish family with ten children in 1971 Dublin

In this archive footage from 1971, reporter Patrick Gallagher meets John and Mary Hall and their ten children to find out what life is like for a large living on a tight budget in suburban Dublin. 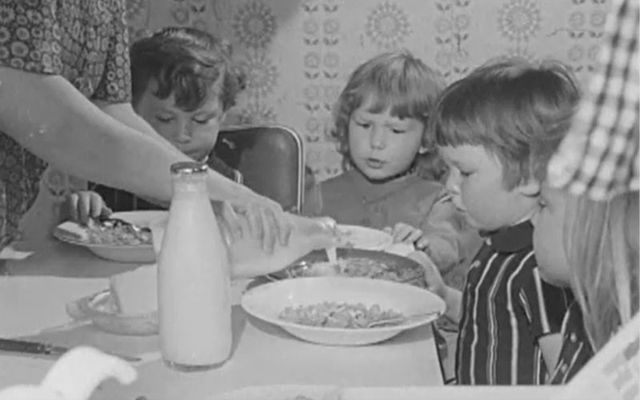 Meet John and Mary Hall and their ten children, who live in a three-bedroom house in Ballyfermot, Dublin in 1971.

In an episode of the RTÉ show ‘Report’ titled ‘Thank God They Are All Healthy’ from 1971, reporter Patrick Gallagher meets John and Mary Hall and their ten children to find out what life is like for a large living on a tight budget in suburban Dublin.

In the opening clip of the black and white footage, Mary stands at the bottom of the stairs in their rented three-bedroom home calling each of the children down.

Carol, Marie, Rosalind, Janet, Edith, Lorraine, Martin, Stephen, David, and Rebecca all troop down the stairs one after the other ranging in age from 14 to 2 years old. In the house, the parents have one bedroom, the boys another room, and the seven sisters all share a bedroom together.

Mary has spent almost twelve years of her married life pregnant having lost two children. "I am thankful to God that I am healthy and that the kids are all healthy. I have had no trouble. I wouldn’t think having a large family is any trouble. I think it all depends on the mother and I don’t think it is any harm," she says.

Even though she loves having a large family, Mary does feel financial struggles especially when she is out shopping for clothes and shoes for all ten children.

John is a carpenter by trade and makes his living as a shop-fitter earning around £23 a week. While their housing situation may be a bit cramped, John is appreciative of having their own garden and privacy, which he says they wouldn't have if they lived in a flat.

Did you enjoy this clip looking at an aspect of Irish life in 1971? Let us know in the comment section below!