The Irish American Building Society is pleased to announce the 38th  Annual Great Irish Fair on Saturday, September 21, at The Ford Amphitheater at Coney Island Boardwalk in Brooklyn, New York.

In partnership with the Great Irish Fair of New York
@IrishCentral 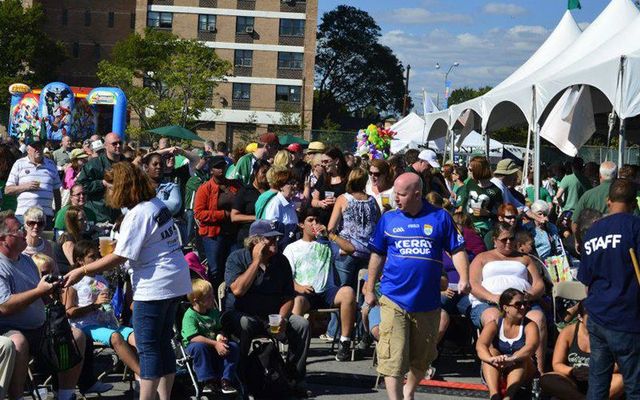 The Irish American Building Society is pleased to announce the 38th  Annual Great Irish Fair on Saturday, September 21, at The Ford Amphitheater at Coney Island Boardwalk in Brooklyn, New York.

We may be a long way from the next St Patrick's Day but as the hot summer comes to a close in New York City, the Irish party in Coney Island will just be getting underway.

On September 21, the Great Irish Fair of New York brings together thousands of people each year for a family-friendly event packed with traditional and contemporary Irish music and dance, as well as goods, food and beverages available for sale from an array of participating vendors.

Now in its 38th year, the Fair celebrates New York City’s deep Irish American history and culture, running from 9:30 am to 9:00 pm at the Coney Island Boardwalk in Brooklyn, New York.

The Great Irish Fair of New York is back again this September 21, 2019. Learn more here: http://bit.ly/2LISqJx

The day begins with a mass service and awards ceremony, followed by numerous exciting performances from esteemed local and international artists. Headlining this year is Shilelagh Law, a band that performs traditional Irish music inspired by more modern New York City influences. The group is excited to participate in an event honoring Irish-American history, particularly in the City.

In preparation for the Great Irish Fair, the Irish American Building Society will be hosting its Kickoff Reception on Monday, September 9 from 6:00 pm to 8:00 pm at St. Francis College, located at 180 Remsen Street in Brooklyn Heights. Tickets to the Kickoff Reception can be purchased here on Eventbrite.

For the past 37 years, the Irish American Building Society has hosted this Fair as a way to give back to the community, promote small businesses and raise money for charitable organizations.

Past performers include Derek Warfield & The Young Wolf Tones, Dermot Henry and The Brooklyn Bards. In addition to multiple musical acts, the Fair will also feature traditional Irish dance performances to be enjoyed by friends and family members of all ages.

The Great Irish Fair will honor distinguished guests with awards that reflect the rich Irish historical traditions and the outstanding achievements of celebrated figures within their heritage. In partnership with other sponsors, the Great Irish Fair is underwritten and organized by the Irish American Building Society Charities, Inc. (IABSC) whose mission is to carry on the great Irish American tradition of giving.

By integrating the arts, classic Irish cuisine and Boardwalk activities, the Fair provides a day of family fun dedicated to bringing New Yorkers together. Multiple booths will be set up to provide guests an opportunity to meet, eat and shop with local business owners. Special attractions and activities will be provided for children during the Fair.

The Ford Amphitheater at Coney Island Boardwalk became the new home of the Fair when the venue opened in 2016. It is a spacious, outdoor venue offering a large stage, concessions and views of the beach. The location’s sound system, capacity and location create the perfect setting for attendees and has hosted major concerts, comedy tours and parties, as well as its prime location near attractions, such as Seaside Park, Kitchen 21 and the amusement parks at Coney Island.

Tickets to the Great Irish Fair can be found on the Eventbrite site here.