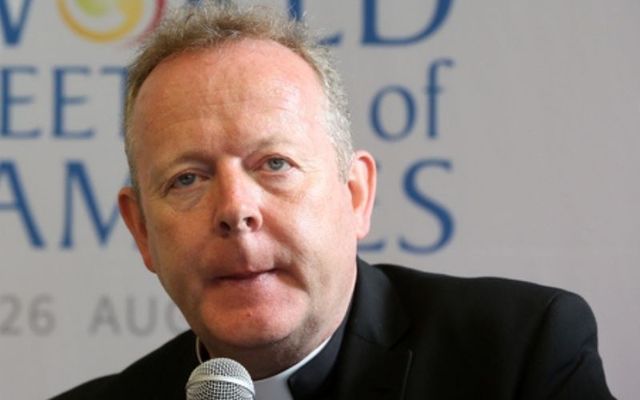 Archbishop Eamon Martin, the head of the Catholic Church in Ireland, slammed RTÉ over the clip. Rolling News

RTÉ has apologized after a comedy sketch show on New Year's Eve depicted God being arrested for rape in a skit that has enraged the leader of the Catholic Church in Ireland.

More than 600 people have complained since RTÉ broadcast the sketch on New Year's Eve and the national broadcaster has acknowledged that it was offensive to some viewers.

"God became the latest figure to be implicated in ongoing sexual harassment scandals," Mac Grianna said in the sketch as a figure in white robes was led from court by gardaí.

Archbishop Eamon Martin, the head of the Catholic Church in Ireland, expressed outrage over the satirical clip and called for its immediate removal from the RTÉ Player.

Martin criticized RTÉ in two tweets on New Year's Day, where he called on people to denounce the clip.

"I am shocked that producer/editor of 'NYE Countdown Show' didn’t realize how deeply offensive was a mocking 'news report' accusing God of rape & reporting his imprisonment. This outrageous clip should be removed immediately & denounced by all people of goodwill," Martin said on Twitter.

"To broadcast such a deeply offensive clip about God and Our Blessed Mother during the Christmas season on RTE and on the eve of the Solemn Feast of Mary, Mother of God, is insulting to all Catholics and Christians."

1. I am shocked that producer/editor of 'NYE Countdown Show' @RTE @RTEOne didn’t realise how deeply offensive was a mocking 'news report' accusing God of rape & reporting his imprisonment. This outrageous clip should be removed immediately & denounced by all people of goodwill.

Meanwhile, the Association of Catholic Priests (ACP) has also criticized RTÉ over the sketch, calling for a full review on RTÉ's reporting of Christian faith.

"The ACP, on behalf of its member and Christians of all denominations, would like to express dismay at the decision of RTÉ to televise a very offensive portrayal of the God whom Christians worship," the group said in a statement.

The portrayal of God as a rapist is deeply offensive. In light of such provocative insensitivity, the ACP would like RTÉ to commit to a review of their policies and approaches to reporting on the Christian faith, and to make the results and relevant recommendations open to public review."

RTÉ has apologized to anyone who was offended by the short clip.

"RTÉ recognizes that matters which can cause offense naturally differ from person to person, within comedy and satire in particular," the broadcaster said in a statement.

"Having reviewed the feedback and complaints received up to this point, RTÉ wishes to apologize to those who were offended by the segment."