What country can you see in this Game of Thrones fan art map of Westeros?

This beautiful, high-resolution map of Westeros by artist and Game of Thrones-fan Julio Lacerda is incredibly detailed. 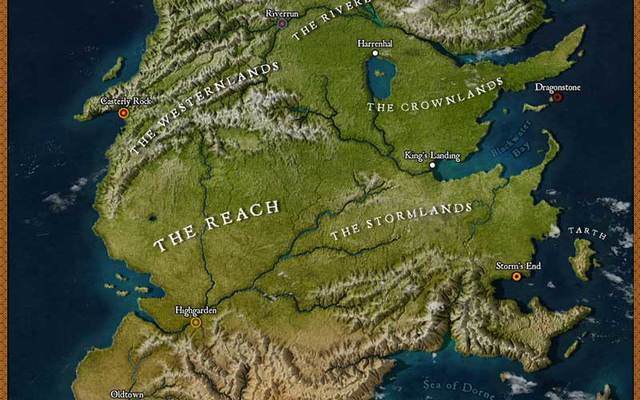 Artist Julio Lacerdo has created an incredible map of Westeros from 'Game of Thrones.' Facebook/Julio Lacerda

This beautiful, high-resolution map of Westeros by artist and Game of Thrones-fan Julio Lacerda is incredibly detailed.

Looking at this map, people on social media can’t help but notice that Westeros looks a lot like an upside-down Ireland and UK combined. And in fact, in 2014, Game of Thrones author George R.R. Martin did reveal that the fictional continent is based on an inverted map of Britain and Ireland.

Lacerda, 25, is a cartography enthusiast and illustrator from Brazil known for his artwork of dinosaurs and other prehistoric animals. In an interview with Bored Panda, he explained how he was inspired to create the map.

”I found out about Game of Thrones when the show was in its second or third season,” said Lacerda. “It was starting to gather a big following, and even though none of my friends had been watching it yet, people were talking about it a lot on the internet. So, I decided to give it a chance and immediately fell in love with it.”

After becoming a fan of the HBO series, he began reading the books by George R.R. Martin.

“As cliche as it sounds, I have to say that I prefer the literary version,” he said. “The world that George R. R. Martin has built over the years is so incredibly detailed and well-thought-out, some aspects of it just have to be simplified or left out altogether for the TV adaptation. Also, working with such a huge audience, a [limited] budget and deadlines make the writing for the show a lot less rich and smart compared to the original. That said, I still like the show very much and it did a great job of bringing the story to life.”

“I think what makes me like Game of Thrones so much is the fact that it’s one of the most complex stories I’ve seen, coupled with truly incredible worldbuilding,” said Lacerda. “At least in the books, every single person and place mentioned have some background info presented at some point, and almost every action of the characters have a meaning or payoff later in the story. It’s a rabbit hole of trivia and theories that are hard to leave once you’ve jumped in!”

“I’ve always loved geography and cartography, and for the past year, I’ve been creating some fantasy maps of my own. With season 8 airing, I felt inspired to try my hand at replicating this iconic map in a somewhat realistic way (as if it was seen from space), since most reconstructions of the maps in Game of Thrones go for either a simplified or traditional, vintage look.”

“Fortunately, the map of Westeros is fairly well-documented,” he concluded. “I cross-referenced several different sources, with special attention to the official The Lands of Ice and Fire maps. It took me around two days to create it; At first, I did the outline of the landmass, I then created a height map to represent the different altitudes and ran it through an erosion simulator, which gives the terrain this realistic look. Then I textured the image with the help of some aerial photographs from NASA and rendered it in a 3D software which interpreted the height map I created to replicate lights and shadows. The final step was to add all the graphics and text.”