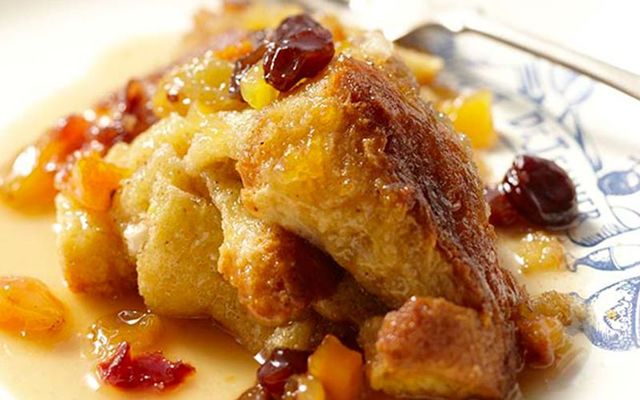 One of my all-time favorite desserts is bread pudding. Traditionally, in Ireland and England, bread puddings are steamed, but sometimes there just isn’t enough time in the day to dedicate a few hours to steaming a raisin pudding.

My kids love cinnamon raisin bread, so I buy many loaves each week. As I toasted a few slices one day I got to thinking what a perfect ingredient for bread pudding.

It already has raisins and cinnamon, so I decided just a few more ingredients might create a very simple bread pudding, that could be baked in the oven, instead of steamed.

Once I developed my recipe, I was in heaven. I hope you enjoy my hassle-free, bread pudding recipe, no boiling required.

In a large bowl, whisk the eggs, milk, and brandy together. Add the sugar, chopped ginger, golden raisins, and cinnamon. Mix well.

Preheat the oven to 350F while the pudding soaks.

Pour the pudding mixture into the baking dish. If desired, sprinkle the top with a little sugar.

Bake at 350F for 45 to 50 minutes. When cooked a knife inserted into the middle comes out clean.

*Mairead Geary came to America for one year 20 years ago. She now lives with her husband and children in Kentucky and is proud to be an American citizen. Read more on her blog here.