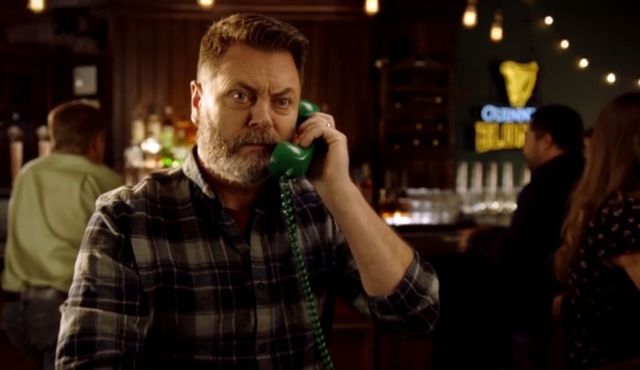 A true father-son creation, the second bottling from longtime partners Nick Offerman and Lagavulin single malt scotch is aged in Guinness casks from the Open Gate Brewery in Maryland.

Lagavulin, the favorite whisky of "Park and Recreation" character Ron Swanson played by Nick Offerman, has teamed up with the actor himself to create a series of ads entitled "Lagavulin: My Tales of Whisky Father's Day".

The latest in the offering sees Nick and his Dad, Ric, save Father's Day culminating in the creation of Lagavulin single malt scotch that is aged in Guinness casks.

For all the wisdom Nick Offerman carries, he has one man to thank: his dad, Ric. Nick has always held Ric's advice in the highest regard, and we have proof - just look at the last four iterations of the pair's Lagavulin: My Tales of Whisky Father's Day videos.

This year, Nick decided to put his best foot forward (or bottle, if you will) and embark on his most ambitious journey yet to create a Father's Day gift worthy of the original Mr. Offerman's approval.

Together, ahead of World Whisky Day, and just in time for their Father's Day tradition, Nick and Ric invite the world to pour a dram of the newest release of Lagavulin Offerman Edition: Guinness Cask Finish.

This new, limited-edition 11-year-old Lagavulin aged for four months in former Guinness beer casks from the Open Gate Brewery, in Maryland, is a true father-son creation.

After a job well done, it is ritual for Nick and Ric to enjoy a well-earned beverage, be it Lagavulin Single Malt Scotch or Guinness Beer. This year on Father's Day, they will uncork a bottle of Lagavulin Offerman Edition: Guinness Cask Finish to toast to their mutual love of both tipples, and the arduous work required to taste and select the perfect single malt for the occasion.

"The opportunity to collaborate on this truly sublime, smoky giggle-juice renews my gratitude for the simple things in life, like a father's love, and the good manners he taught me," said Offerman.

The inventive spirit of this collaboration is brought to life in the newest video in the ongoing Lagavulin: My Tales of Whisky series, 'Nick Offerman's Father's Day Part Five.' The adventurous tale reveals the lengths to which Nick went to create Lagavulin Offerman Edition: Guinness Cask Finish for his dad. Now, Nick, Ric, and Lagavulin are proud to announce their new dram of choice after a hard day's work, which they recommend enjoying neat or on ice – but always over tales of whisky.

Lagavulin Offerman Edition: Guinness Cask Finish is a glorious adventure in 'sweet peat' through the combination of the intense peat and charred wood notes of Lagavulin with the roasted coffee, dark chocolate, and sweet caramel notes from the Guinness casks.

The limited-edition Single Malt has an SRP of $79.99 and will be available in the U.S. wherever fine spirits are sold, as well as via ReserveBar.com, Drizly.com, and the Drizly app where shipping and delivery are available.