Per a bizarre state-wide regulation, selling Irish Kerrygold butter is illegal in Wisconsin. A petition asks the governor to let his people enjoy the delicious Irish butter. 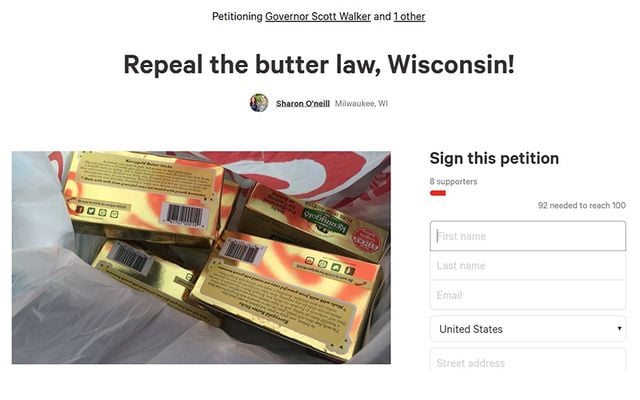 Per a bizarre state-wide regulation, selling Irish Kerrygold butter is illegal in Wisconsin. A petition asks the governor to let his people enjoy the delicious Irish butter. Change.org

Wisconsin is famous for its love of dairy, so last week's news that Ireland’s prized Kerrygold butter is illegal in the state was met with surprise across Ireland and the US.

There is now a petition asking Wisconsin Governor Scott Walker and the Wisconsin State Legislature to overturn the regulation and allow Wisconsinites to have legal access to the delicious butter.

How is Wisconsin the only state where selling Kerrygold is illegal? According to a state-wide regulation that dates back to 1970, all butter sold in Wisconsin must bear either a federal or Wisconsin grade mark. Kerrygold, which is processed, packaged and graded in Ireland, does not. While Kerrygold has been sold in the state in the past, authorities began enforcing the law more stringently in recent years, seeing the Irish butter cleared from the shelves. Now, shop owners who break the law can face $1,000 in fines or up to six months in prison.

@KerrygoldUSA I can't find kerrygold butter anywhere near me. Please help. I live in Milwaukee, Wisconsin.

Wisconsin fans of the butter – some of whom prefer it for not just for taste but for health reasons – have resorted to desperate measures to get their hands on Kerrygold. One Wisconsin resident, Jean Smith, told TMJ4 news that she now regularly travels across state lines to Nebraska just to purchase Kerrygold in bulk.

Since the news broke, critics have decried the ban on the criminally delicious butter as an example of state legislation run amok, citing Wisconsin’s massive dairy industry as a possible reason for the law's re-emergence.

Now, a Change.org petition started by Sharon O’Neill calls for the law to be changed.

“A 1970s law forbids the sale of ungraded butter in WI. We ask that the WI government repeal this law as it places undue limitation on consumers who wish to purchase high quality, grassfed [sic] butter such as Kerrygold Pure Irish Butter. The standards followed by European butter producers go above and beyond what the Grade A WI standard requires. This law is outdated and should be eliminated,” the petition reads.

At the time of writing, the petition has 8 signatures, but given the widespread interest in the story and the many Kerrygold fans out there, the numbers will undoubtedly rise sharply.

If we learned anything from the Cadbury’s/Hershey’s debacle of 2015 it’s that Irish food fans have a knack for churning the waters of regulations that deprive them of their favored products.

One of the petition’s supporters noted her desire for choice as a consumer, while another, signing from out of state, added her name to the petition in support of friends whose doctor had recommended Kerrygold, which is thought to be healthier because of the purity of the milk from grass-fed cows.

Meanwhile, Ornua, the Irish Dairy Board, has said they are in conversation with Wisconsin officials to find out what can be done to get Kerrygold back on shelves across the state.

"We are currently working with the Wisconsin authorities on a solution which will enable consumers throughout the state enjoy the great taste of Kerrygold butter," read Ornua's statement to the Irish Farmers Journal.

You can find the petition to make selling Kerrygold in Wisconsin legal here.

Will you be signing the petition? Do you think Wisconsin should change its regulations to allow Kerrygold? Let us know in the comment section.