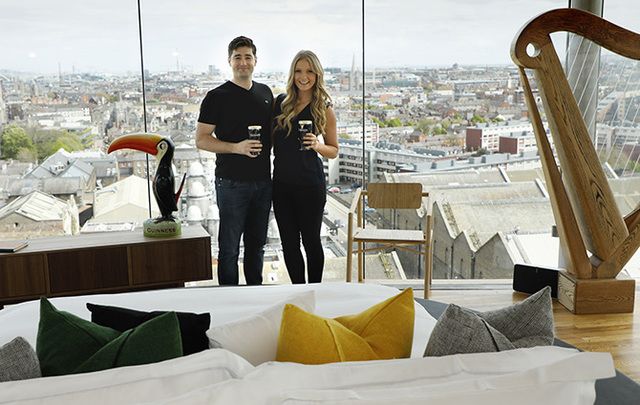 A dream come true? This couple stayed over-night at the Guinness Storehouse. kieranharnett.com

A New Yorker has won the privilege of being presented with the keys to St. James’s Gate, Guinness’ iconic Dublin brewery, in the first competition of its kind – Airbnb’s “Night At.”

For 24 hours the Gravity Bar at Guinness Storehouse, was transformed for James Morrissey and his wife Kaitlin. The lucky pair were treated to a Guinness VIP experience complete with a tasting bar and private butler, “perfect pint”-shaped bed, pool table, life-sized Jenga, and giant telescope for a night under the stars.

Airbnb’s unique competition ran in March. Guinness’ Gravity Bar was listed as a residence on Airbnb’s website, offering one lucky beer fan and a friend the opportunity to be the first people to spend a night at the Home of Guinness. 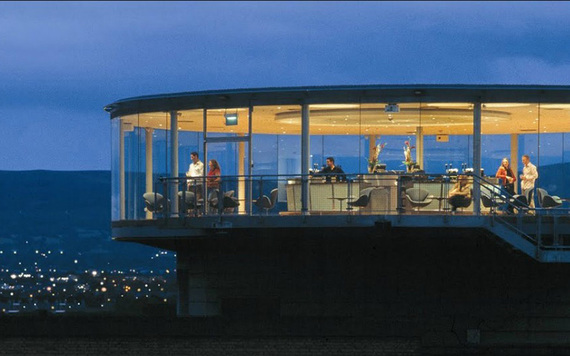 Guinness Storehouse's Gravity Bar, where James and his wife bedded down for the night.

To be in with a chance to win entrants were invited to answer the following question:

‘What makes you the world’s biggest Guinness fan?’

The responses were apparently overwhelming, with over 40,000 entries from across the globe, but one entry stood out among them all – James Morrissey from New York! 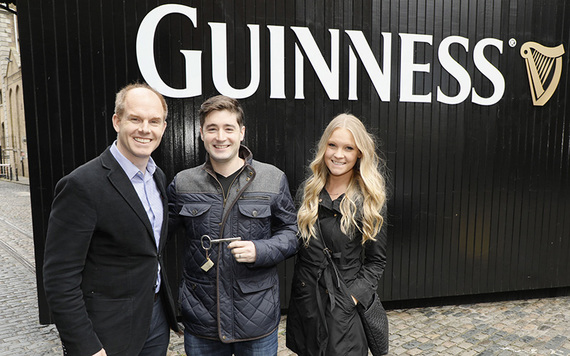 The couple was welcomed by Mark Sandys, Global Head of Beer, Baileys & Smirnoff, before being handed the keys to the Guinness Storehouse. They experienced life behind the gates with rare access into the heart of the legendary St. James’s Gate Brewery, the production site that has been home to the Guinness Brewery since 1759, when its owner Arthur Guinness signed a lease for 9,000 years.

Starting at No.1 Thomas Street, family home to Arthur, Guinness Archivist Eibhlin Colgan took the pair on a journey through the history of the brewery along 19th Century railway tracks and through hidden tunnels, telling the rich story of the Guinness family heritage. They enjoyed a full Guinness Storehouse experience with private tour topped off with a six-course dining experience, designed with Irish ingredients and Guinness pairings by Guinness Storehouse Executive Chef Justin O’Connor and served in the surroundings of the Gravity Bar. 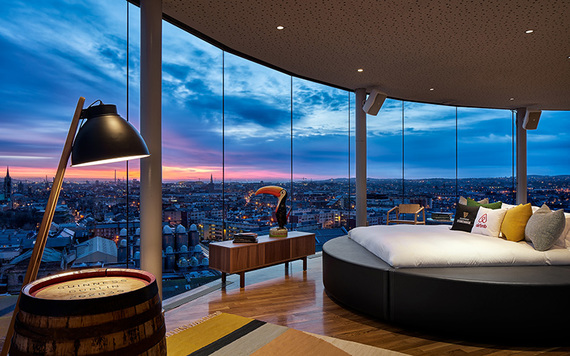 A Guinness pint shapped bed at the home of the black stuff.

Following the ‘Night at’ the Guinness Storehouse, James and Kaitlin were treated to an Irish breakfast before meeting with Guinness Brewer, Peter Simpson, who taught them how to create their very own Guinness brew.

“James’s passion and knowledge of Guinness and the Storehouse was evident from his entry and he captured the true character of St. James’s Gate, which is filled with hundreds of years of history,” said Paul Carty, Managing Director of the Guinness Storehouse.

“We’re proud of Guinness’ heritage, and are delighted to welcome such a worthy and enthusiastic winner through the gates.” 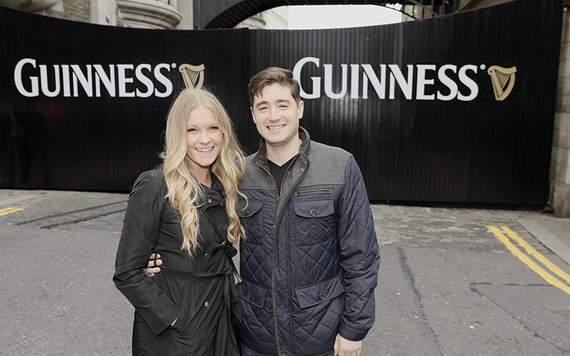 The lucky couple, grinning from ear to ear.

The Gravity Bar, where the couple actually stayed, is the symbolic ‘Head of the Pint,’ Dublin’s highest bar and features unparalleled panoramic, 360-degree views of the city through the floor-to-ceiling glass windows. The transformation of the space into a luxury penthouse was curated by renowned interior designer Graham O’Donnell and featured a balance of contemporary Irish craft furniture alongside original Guinness artifacts from the Guinness Archives, including notable works such as the Guinness Toucan.

In 2016, the Guinness Storehouse welcomed 1.65 million visitors from around the world. The Storehouse building was once the brewery fermentation plant and is now a seven-story visitor experience, where visitors discover what goes into the making of each pint of Guinness, as well as learning about the notable brand history which stretches over 250 years.