It's National Ice Cream Month! Here's a recipe to make your own ice cream sandwich

Beat the heat and chill out during National Ice Cream Month with your own homemade dessert! 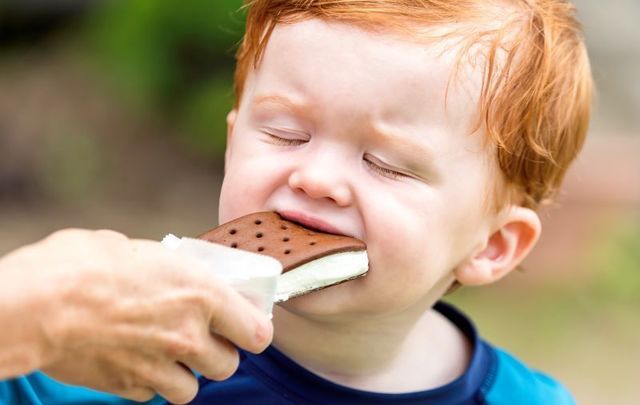 Beat the heat with an ice cream sandwich on August 2! Getty Images

Who can think of a better time to eat an ice cream sandwich than right now as the temperature hovers around the 90-degree mark?

I did some extensive research (10 minutes of Google) and I couldn’t come up with a creator or origin for this delightful national day. I did, however, find that this holiday has been celebrated for years and the ice cream sandwich does have a history all around the world!

You can buy sliders consisting of vanilla ice cream sandwiched between one wafer and one block of chocolate-covered nougat. These are known as nougat sliders. Alternatively, called a 'single nougat' or in the case of two blocks of nougat; a 'double nougat.' In this context, the word nougat is pronounced as in gold nugget.

The original ice cream sandwich was commonly known as a 'cream between.' One purchased a small block of ice cream wrapped in paper and placed it between two wafers.

Although not as widely popular as other ice cream desserts which are promoted more, the ice cream sandwich is considered a nostalgic favorite within Australia.

Wafer ice cream is a type of ice cream popular in Singapore. It consists of two original wafers holding together a block of ice cream. Vendors are commonly found along Orchard Road, Chinatown and outside schools.

In Ireland, England, and Wales, an ice cream wafer, consisting of a small block of ice cream between two rectangular wafer biscuits, was a popular alternative to a cone up until the 1970s. Since then it has declined and is now rarely seen.

In the United States, an ice cream sandwich is a slice of ice cream, commonly vanilla although other flavors are often used, sandwiched between two rectangular wafers, usually chocolate."

Alternatives to wafers are often used, such as chocolate chip cookies. Many companies offer alternatives to the conventional ice cream sandwich as well, such as San Francisco's It's-It, who use oatmeal cookies and dip the sandwich in dark chocolate, New Jersey-based Rice Creams, Inc., who use crispy rice and marshmallow wafers, and Jeni's Splendid Ice Creams of Columbus, Ohio, who use artisan ice creams and almond macaroons.

So now that we know what ice cream sandwiches are, let's make our own!

Preheat oven to 350 degrees F and place rack in center of oven. Butter, or spray with a nonstick vegetable spray, a 10 x 15 inch rimmed baking sheet. Then line the pan with parchment paper, leaving a 2 inch overhang on the two shorter sides.

In a large bowl, whisk together the melted butter and sugar. Whisk in the egg and vanilla extract. Add the flour, cocoa powder, and salt and stir until combined and smooth. Spread the batter evenly in the prepared pan, smoothing the top. Bake for about 10 minutes, or until the cake is dry to the touch and the edges just begin to pull away from the sides of the pan. Remove from oven and place on a wire rack to cool.

Using the paper overhang, gently lift the cake onto a cutting board. With a serrated knife, cut the cake in half crosswise. Place one half of the cake, top side down, on a large piece of plastic wrap. Spread with the softened ice cream, smoothing with an offset spatula. Top with the remaining half of cake, top side up. Place the assembled dessert back into the baking pan and wrap tightly in plastic wrap. Place in the freezer until firm, about two hours or overnight.

When ready to serve, remove the dessert from the freezer, unwrap, and with a serrated knife, cut into eight rectangles. Wipe the knife with a damp kitchen towel or paper towel between each slice. Can serve immediately or wrap each sandwich in plastic wrap and place back into the freezer. These can be stored in the freezer up to one week.

Upon hearing that her elderly grandfather had just passed away, Katie went straight to her grandparent's house to visit her 95-year-old grandmother and comfort her.

When she asked how her grandfather had died, her grandmother replied, "He had a heart attack while we were making love on Sunday morning."

Horrified, Katie told her grandmother that two people nearly 100 years old having sex would surely be asking for trouble.

"Oh no, my dear," replied granny. "Many years ago, realizing our advanced age, we figured out the best time to do it was when the church bells would start to ring. It was just the right rhythm. Nice and slow and even nothing too strenuous, simply in on the Ding and out on the Dong."

She paused to wipe away a tear, and continued, "He'd still be alive if the ice cream truck hadn't come along!"

What's your favorite recipe to use this summer? Let us know in the comments!