Irish whiskey production to jump by 33% after $12.7m investment in stills

Irish whiskey brands Jameson, Powers, and Redbreast can expect a boost in worldwide sales with thanks to investment in the production cycle. 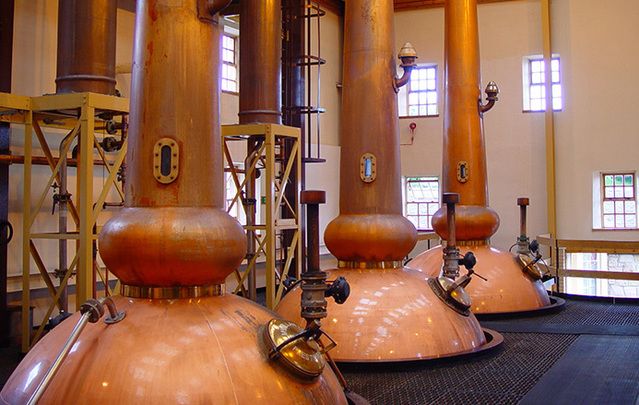 Irish whiskey brands Jameson, Powers, and Redbreast can expect a boost in worldwide sales with thanks to investment in the production cycle. iStock

Just in time for the start of Trump’s presidency, one distillery in Ireland is set to up their production of Irish whiskey by a third in 2017 with thanks to a $12.7 million investment.

Irish Distillers are making a multi-million dollar investment in stills (distilling tanks) this year, predicted to see a growth rate of 33% in the production of the best Irish whiskey from their Midleton, Co. Cork distillery, allowing them to add to the remarkable growth experienced throughout 2016.

Home to some of the world’s top whiskey brands such as Jameson, Powers, and Redbreast, Irish Distillers this month welcomed the arrival of three large copper steel tanks as part of the massive current expansion plan.

The tanks arrived in Horgan’s Quay, Cork, in the early hours of the morning on January 19 and were shipped to Midleton where it is believed they will be installed over the last few days of the month.

Handmade by Forsyth's in Scotland, the stills are identical to those installed since the production cycle began increasing in 2012.

“All of the infrastructure for these has been in place since 2012 or 2013. That includes the tanks you can see in our glasshouse — these new ones will slot in behind those,” Tommy Keane, head of distilling operations at Irish Distillers, told the Evening Echo.

Exciting times in Midleton as we take delivery of 3 new stills to increase our single pot still Irish whiskey production capacity by 30% pic.twitter.com/fhSTBu9K7s

In 2012, $215 million was invested into the East Cork distillery, creating 90 jobs, and the increased financing of the production cycle is proving to be extremely profitable, especially in the US market.

While celebrating its 27th consecutive year of growth, Jameson whiskey sold more than 5.7 million cases worldwide in the year ending June 2016, representing a quarter of its parent company, Pernot Ricard’s, total sales in the US.

The famed Irish whiskey is also experiencing double and triple-digit growth in 62 of its 130 markets around the world.

“This was led by the US, but also South Africa, Eastern Europe, and Russia. Year-on-year, our growth profile remains extremely strong.”

With almost 200 people now employed by the Cork distillery, plans are in place to increase growth even further, and aims are set to double sales by 2020.

“The new plant has settled and is meeting all of its sustainability targets. It was a good time for investment and we are seeing the results of it now,” Keane added.

While the Emerald Isle has long been known for its whiskey, it recently underwent a massive revival with new distilleries and plans set out for production from Teeling’s in Dublin to Waterford and Rademon Estate.

Following on from this success, Ireland has also seen an uptake in whiskey tourism in the past few years, with Tourism Ireland and the Irish Whiskey Association hoping to establish the country as the world leader by 2030.

Proposing the establishment of an all-island whiskey trail, tourism infrastructure around distilleries and fostering an embassy network of hotels, restaurants, and pubs is also recommended.

“What we’ve witnessed over the past few years truly is a renaissance in the industry”, said Head of the Irish Whiskey Association, Miriam Mooney.

“This strategy sets the conditions for the next step in growth for the industry. In 2013 there were just 4 distilleries in Ireland, today there are 16 in production and 13 in planning in 18 counties across Ireland. With national and local government support, Irish whiskey tourism has the potential to grow from 653,277 visitors every year up to 1.9 million visitors by 2025, spending an estimated €1.3 billion every year.”

If this has got your taste buds all worked up, you can see IrishCentral’s pick of the most delicious of Irish whiskeys here.

What’s your favorite Irish whiskey? Let us know in the comments section, below.