The Adelphi pub in Dublin was relieved of its Donald Trump urinal portrait earlier this week and is offering a reward for its return. 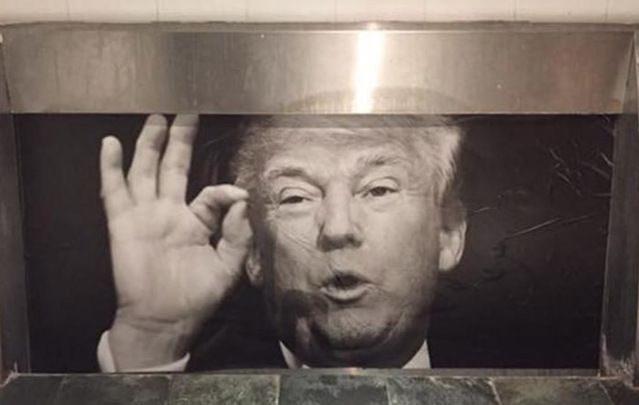 The Donald Trump urinal decor at The Adelphi in Dublin. Facebook

A Dublin bar is offering a reward for the return of a Donald Trump portrait that has been a key attraction of its men's bathroom for over a year.

The Adelphi, on Dublin's Abbey Street, strategically placed a Donald Trump photo in its urinals last summer, with manager Tony McCabe saying he "just felt that it was a way for some people to express their feelings towards Mr. Trump's views and to make their trip to the bathroom a 'wee' bit more entertaining."

Though he did initially say he would remove the portrait should Trump become president, it has remained and presumably come in contact with a vast quantity of bodily fluids, which makes its theft from The Adelphi on Monday of this week all the more perplexing.

On Tuesday, the bar staff appealed to their Facebook community to aid in the return of the portrait, offering a €100 beer tab ($118) as an incentive.

“Our bathroom is just not the same without him and the enjoyment of using the urinal without Donald’s face on it has left us feeling sad,” they wrote.

McCabe denied claims that the theft was a publicity stunt, telling the Huffington Post that “One of our barmen recalls a guy in on Monday asking many, many questions about it so he is top of our list," and sharing his fear that it was now hanging on that patron's wall "along with the DNA of thousands of Irishmen."

Read More: The top Dublin pubs for the craic and a Guinness