Today, Nov 18, is International Poitín Day! What better way to celebrate than learning about its history from the experts. 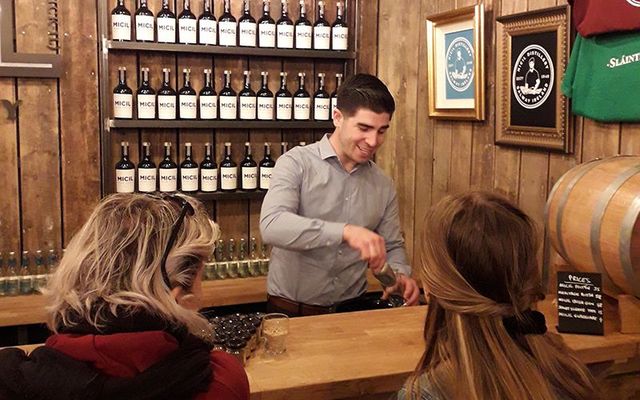 Irish moonshine, or poitín, was illegal for 150 years, but now you can try poitín and learn how it's made at the Micil Distillery in Galway, founded by a man from generations of poitín distillers.

Have you heard about the young Irishman who gave up a career in teaching in order to distill poitín (pronounced put-cheen) the notorious “Irish moonshine”?

Not only that, Connemara native Padraic O Griallais is introducing tourists to the delights of ‘poitín’ with informative tours of his new distillery in Galway City.

The tours give a wonderful insight into his family’s involvement in the formerly illicit industry over the past 150 years. They also include tastings of his family’s distinctive liquor and the brand new gin he introduced to the market just three weeks ago.

Tours of the Micil Distillery in Salthill, Galway City, only opened to the public last month, but already they are proving a big hit with tourists and locals alike thanks to Padraic’s infectious personality and his enthusiasm for his craft. 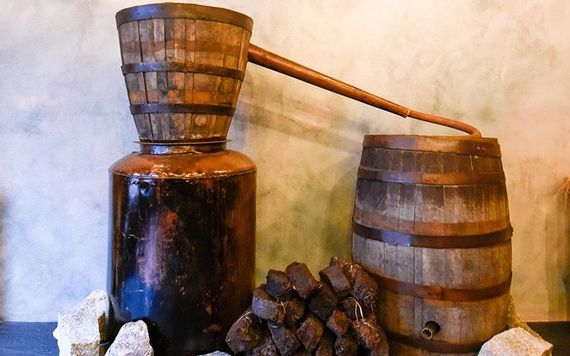 Spend an hour in his company and it is soon clear that he takes great pride in his family tradition, dating back to the time of his great-great-grandfather, as he shares the secrets of a trade which was illegal all across Ireland from 1760 right up until 1997.

“When I worked as a teacher I never thought I’d start a distillery,” he tells me with a smile at the end of a Friday afternoon tour. “I decided to take the plunge and do this in 2015. On my last day at the secondary school, a former colleague said he knew a lot of teachers who turn to drink . . .  but that I am the first to make a business out of it!

“There were a number of teachers retiring that day as well. They asked me to bring samples to the school once the distillery was up and running. There was talk of bringing CCTV into the school at the time. They asked me how I would manage to get the stuff in if there were video cameras in the school. I said you don’t make poitín for six generations without knowing how to sneak things in!”

Padraic loves to tell visitors that he’s the sixth generation of his family to make poitín, but the first in the family to be able to do so legally. His 91-year old grandfather, Jimmi Chearra, used to distill – illegally – on common ground near his family home when Padraic was a youngster and he taught his grandson the tricks of his trade. 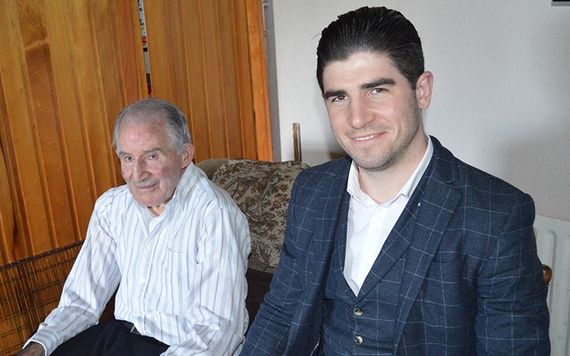 As well as giving visitors an opportunity to sample his acclaimed products, Padraic’s personalized tours at the distillery – located at the back of the Oslo pub – are a treasure-trove of colorful stories and insights into distillation techniques down through the centuries.

The centerpiece of the distillery, which is located in a former brewery, is the still which his grandfather used – and hid in bog holes from the eyes of inquisitive Gardai (police) – when Padraic was growing up.

“Before you distill, you have to brew,” he tells IrishCentral. “I was so lucky that this former brewery became available just as I was setting up the business. My grandfather thinks it’s great. He loves the equipment here. He’s delighted to see me carry on the family tradition. When he sees a 1,000-litre fermenter he thinks it’s great. He’s 91 and he’s still a bit of a rogue!”

Jimmi approves of his grandson’s legalized product so much that he gets a bottle delivered to his house on the shores of Galway Bay every week. Padraig jokes that Jimmi “would like a gallon” but he thinks one bottle a week is enough at his age!

“People love the authentic story, the family tradition, and the fact that the poitín comes from Connemara. They can see this is a story that has legs. People used to come from far and wide for my grandfather’s poitín. He was a bit of a legend across Connemara and the West of Ireland,” says Padraig. 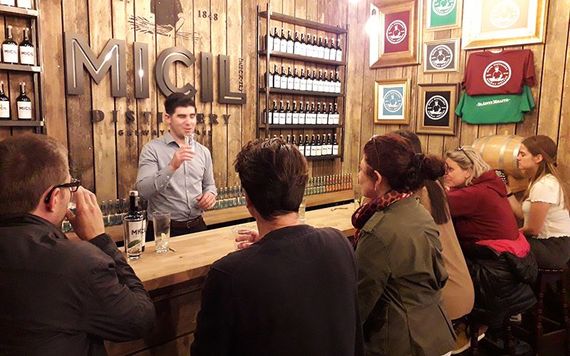 “I grew up right beside my grandfather. I knew all the spots where he was distilling. Bog water cleans copper beautifully because it is mildly acidic. You would usually be near a good water source. If you had iron in the water the poitín would be no good. During my tours, I tell people how we use good quality grain. Everyone thinks poitín comes from potatoes, but we actually use barley.”

Padraig loves to tell tourists about his family’s colorful backstory of poitín making. His tours include tales of police raids, Irish wakes, evictions, and a crazy story about the night local men in Connemara stole the family’s still back from the Gardai after it had been confiscated.

He also talks about the Connemara tradition of leaving out a glass for the “good people” – or the fairies – and how neighbors sometimes took advantage of his grandfather’s toil from dusk until dawn by helping themselves at times!

The last legal distillery in Galway closed down in 1911 and Padraic certainly knows the history of distillation in Ireland, both under the British Empire and in the years which followed independence. 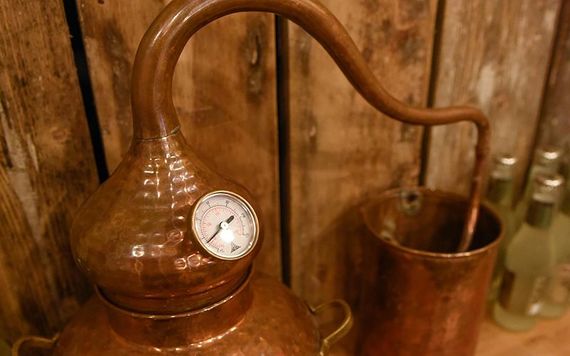 Padraic grew up in an Irish-speaking household in the Connemara Gaeltacht and talks about how the English word whiskey comes from the mispronunciation of the Gaelic ‘uisce beatha’ or ‘water of life’.

“The Red Book of Ossary described distilling in the east of Ireland in the middle of the 14th century. Around the 16th century, nearly every second household in the country had its own distillation apparatus, a small still to produce their own poitín. It was an unaged spirit and the wonderful thing is that there was no taxation on it. It was like water or fruit,” he tells me.

“The English introduced taxation on poitín in 1661 which marked the first step away from complete freedom to make your own spirits. The taxation was largely ignored. But a full blanket ban on poitín was introduced by the British in 1760, at Christmas time, and that drove the whole industry underground.”

He says that poitín-making thrived in the more remote parts of Ireland, such as Connemara and West Donegal, where the British had less of an influence and the Irish language also survived. Distillers would work under moonlight on common land, or commonages, and bury their stills in bog holes or lakes at dawn.

The distillers brought their craft across the Atlantic with them, hence the American term “moonshine” which lives on to this day.

“My grandfather would certainly have a rebellious spirit about him. It comes from the harsh landscape, you have to be resilient and be able to adapt. I called the product after my great-great-grandfather Micil, who was actually evicted from his first farm from his British landlord. It was survival of the fittest in those days,” says Padraic.

“People in Connemara tended to stick together, they had a great sense of community, and they had no respect for British laws. Hence, they would look out for the poitín-makers and tell them if the Royal Irish Constabulary were about.” 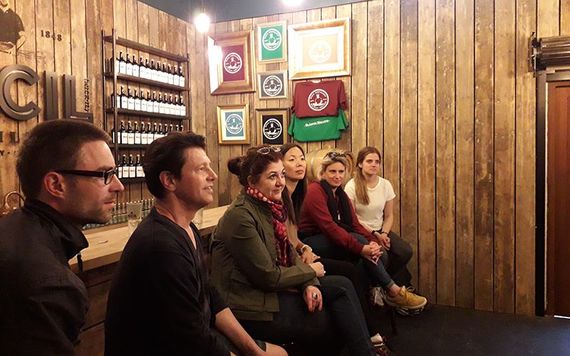 Padraic has a keen interest in family history. He grew up on stories of how Micil stole a bull from his English landlord in order to feed his Indreabhan neighbors or the night the locals helped his grandfather to ‘liberate’ his still from the local Garda Station, which tended to be left unoccupied late at night.

He is on a mission now to remind Irish people that poitín is no longer illegal and to show visitors to his distillery that it’s a high-quality product that is made with a lot of care.

“The distiller was regarded as highly as the other craftsmen of the area, whether they were coopers or roofers or tailors. They were held in high esteem depending on how good they were at their craft,” says Padraic with visible pride.

He believes that some distributors gave poitín a bad name when it was illegal because they would mix it with turpentine in order to maximize their profits.

“A good distiller had a reputation to maintain in Connemara and if their poitín wasn’t good the demand would wear off. People would even travel from outside of Connemara and Galway to buy his poitín. It was an income for small farmers in the West of Ireland. It played a huge part in the economy of the poorest part of Ireland, especially when it was illegal,” he says. 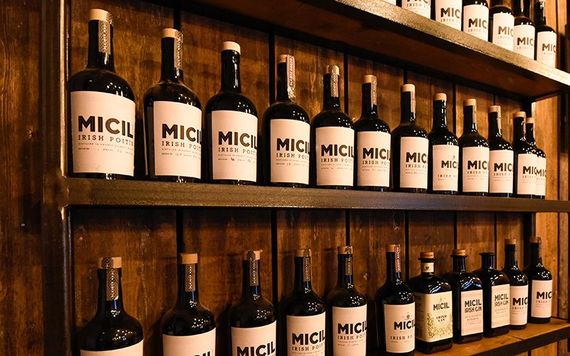 The tours last for about an hour and it’s clear from talking to him that the product and the business are very close to Padraic’s heart. He talks about the bogbean, which gives Micil a very distinctive taste and revels in seeing the reaction of visitors when they sample a glass for the first time.

An hour in Padraic’s company will greatly improve your knowledge of this colorful part of Irish social history and the defiance of a people who continued to distill for centuries despite the hostility of the British and Irish authorities.

It’s clear from talking to Padraic that his work is close to his heart. After all, he did give up teaching in order to make his “moonshine” . . . thankfully, without having to worry about late-night police raids or the threat of having his still impounded!

“This tradition has been handed down from generation to generation,” says Padraic. “My grandfather taught me everything I know. I know I’m very lucky to be the first generation of the family to be able to distill poitín legally!”

To find out more, or to organize a tour of the Micil Distillery in Galway, please check out Micil.ie 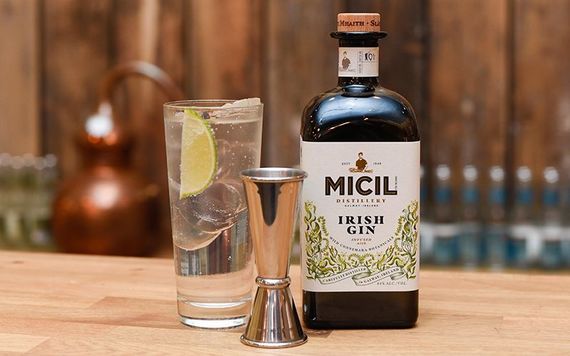