Poitín now legal to drink in Ireland as first license given

After generations of his family spent their lives as outlaws for making the infamous Irish poitín, Pádraic Ó Griallais has finally been able to carry out the family business in the open. 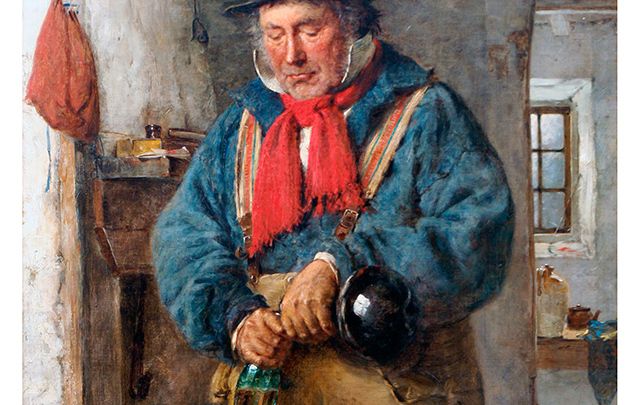 A Nip Against the Cold by Erskine Nicol. Public Domain / WikiCommons

After generations of his family spent their lives as outlaws for making the infamous Irish poitín, Pádraic Ó Griallais has finally been able to carry out the family business in the open just under a decade after the spirit was outlawed.

Taking a career break from his job as a high school teacher to establish a new business based on his old family recipe, Ó Griallais is free to produce and sell the highly alcoholic spirit as he pleases without the interference of the Gardaí [Irish police], who hounded the previous poitín distillers in his family with raids to put a stop to the production of the beverage that was outlawed from 1661 to 1997 due to excise regulations.

The production of the spirit was regulated by the Irish Department of Agriculture in 1997 but only under their specific regulations. Luckily the regulations still allow Ó Griallais to use the botanical bogbean that grows around his family’s homeland around Indreabhán, County Galway, that makes their specific recipe so special.

“The bogbean is a relative of the water lily, and it gives a lovely herbal flavour,” Ó Griallais told the Irish Times.

“There were developments in micro stilling, poitín had been given geographical indicative status by the EU, and some companies were starting to make versions of it, with varied success.

“I suppose I knew our family had a respected recipe, and so I applied to the Revenue Commissioners to set up myself.”

Ó Griallais is aware of his family making poitín as far back as his great great great grandfather Micíl Chearra after whom he’s named his new label “Poitín Mhicíl” distilled in his premises in Salthill. The label will now be the subject of a new documentary to be aired on TG4 on New Year’s Day.

While Micíl was lucky enough to enjoy a good relationship with the local Royal Irish Constabulary (the police force in Ireland and the time), his grandfather Jimmí Chearra was not as fortunate, being fined 12 Irish pounds in court when his house was raided.

Deciding to take up the skill once he returned from England in 1957, Chearra was lucky enough that this was the only time he was caught.

“My father had given up his still and pot in 1927 – the year I was born – because the gardaí had very little to do at that time and so poitín men had no peace, morning, noon or night,” he told the Irish paper.

"The last round my father made was on no man’s land, but he was spied upon, and the garda hired a local man with horse and cart to bring his barrels to the barracks.

“It wasn’t an easy job, as you would have to soak the grain in a pool for two days and two nights, and barley was always the best.

“Wheat was sweeter, oats made it lighter, and you could also use rye – but then you’d burn the pot,” he continued.

“When you think of how men like my grandfather had to use sight and taste, rather than temperature gauges, you realise that it really is a terrific skill,” Ó Griallais added.