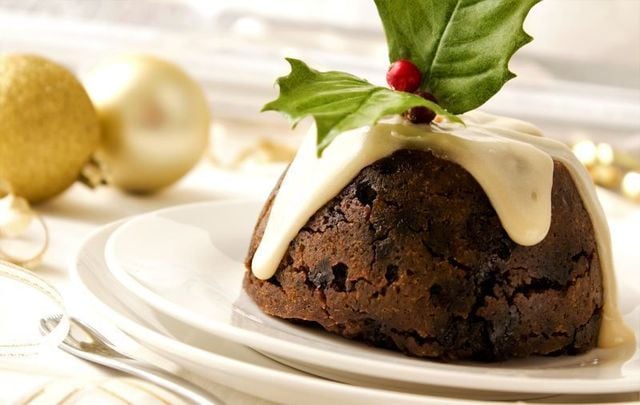 Continuing our Christmas preparations, here's the ideal traditional Irish or Irish American Christmas pudding recipe. It doesn't contain any whiskey but there's plenty of brandy and Guinness to keep you happy.

Plumcake is still a traditional Christmas food in Ireland. (God knows why I hear you say!)

It was often prepared a year before making its appearance at the holiday table. Plumcake (and fruitcake) is like a fine wine—it needs time to allow the full flavor to develop.

Plumcake appears to have evolved from the plum pudding. A good plum pudding, whose recipe was a closely guarded family secret, was cooked then allowed to ripen in a cupboard where it grew hard and dry. The older it got, the harder it grew.

Plum pudding was steamed prior to serving to make it moist and therefore edible. My theory is that cooks soon learned they could keep the pudding moist and preserve it by soaking it in liqueur. Thus plum pudding became plumcake aka fruitcake.

Whatever the origin of fruitcake, it has gotten a particularly bad reputation as something to be shunned or thrown about like a medicine ball.

However, a good fruitcake, rich and sweet with molasses or brown sugar along with a cup of afternoon tea is something that must be tried.

This is a classic Christmas dessert, but why is it called Plum Pudding when there are no Plums in it? Beats me!

The best thing to do with this cake is to pour the brandy butter over it, set it on fire and when Aunt Maureen has fallen asleep at the table letting out silent but deadly farts, push it in front of her and get everyone to scream “Fire!” That’s what the holidays are all about: family.

Grease 3 pudding bowls of varying sizes. Place circular greased pieces of tin foil around the bottom of the bowls.

Add the flour, spice, salt, breadcrumbs, suet, and sugars to it and mix well.

It is an Irish tradition to ask each of the members of your family to stir the mixture for luck!

Now cover the mixture with a towel and leave overnight. This is very important.

Next day, mix again and place the mixture into the prepared bowls.

Don't fill the bowls right up to the top. This leaves room for the pudding to expand when it is cooking.

Cover with a double layer of greased greaseproof paper and a layer of tin foil.

Put each of the bowls in a large saucepan. Fill the saucepan halfway up with boiling water and maintain this level by adding more boiling water during the cooking.

A small saucer placed in the bottom of the saucepan prevents the pudding bowl from moving around.

On the day you want to eat the pudding, heat it up in a microwave, douse it in brandy and set it alight. When the fire has gone out, serve with cream, custard or brandy butter.

Put all the ingredients into a bowl. Beat with an electric beater until the mixture is smooth and well-integrated.

Refrigerate for at least 4 hours until the mixture is firm.

What's your favorite Christmas recipe? Share in the comments!