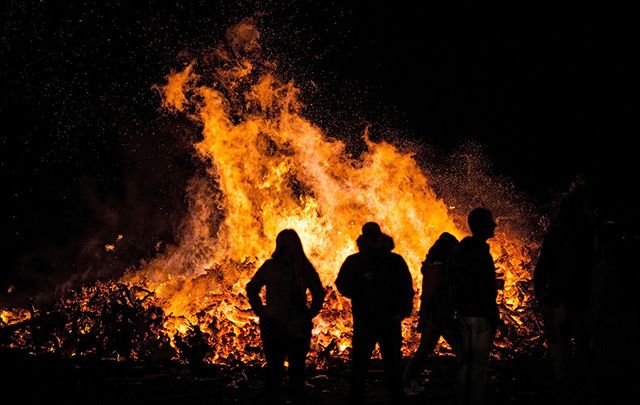 Remember, remember the Fifth of November! And here's a little something to warm your cockles as the fire burns!

Guy Fawkes Day recipes to keep you warm this evening.

During this period there were religious problems between Protestants and Catholics in Britain (No really! Who would have thought that? Thank God we have moved on from that!)

King James I was a Protestant and he passed severe laws against Catholics. They were not permitted to have religious services. A group of twelve Catholics decided to kill King James I and destroy the Parliament Building.

They planned to blow up The Houses of Parliament on November 5, 1605, when the King was present. This was called the Gunpowder Plot.

The King's soldiers discovered the plot. Guy Fawkes was immediately arrested and tortured. The other plotters were found three days later.

Guy Fawkes and the others were hanged. On the night of November 5, 1605, many people in London were very happy because the plot was discovered. To celebrate they started bonfires in the street. Someone made an effigy of Guy Fawkes and burned it

Ever since the British have celebrated Guy Fawkes' Night. The celebrating of "Bonfire" or "Guy Fawkes' Night" is well established in England. These days it is an excuse to let off fireworks and have a good time. Its origins are all but forgotten, although everyone knows of Guy Fawkes and the rough outline of the story.

Any religious significance is certainly absent these days, except perhaps in Lewes in Sussex where Nov 5 is particularly relished. As I can remember it was always freezing on Bonfire night so these dishes would warm up anyone.

- Pour wine and water in saucepan and heat

- Add oranges (sliced), cinnamon sticks, cloves, and sugar and simmer for an hour with the lid on

- Optional extra - a splash of the spirit of your choice just before serving.

- Bunch of fresh herbs (parsley, basil, coriander, oregano - any of these or a mixture)

- Melt the butter in a saucepan and add the sugar

- If it starts to get too dry add some more water

- Now pour some olive oil in a saucepan and gently cook the onion and leek, both of which have been finely sliced

- Now chop the garlic and add this

- Add the chicken stock and stir. Now peel and dice the carrots and add, together with the peas

- Now stir in the cooked red cabbage, together with all the juices

- Add the cherry tomatoes, which have been cut in half. Add the herbs (chopped) and season well

-  Put a lid on and simmer gently for at least an hour. Serve with some crusty bread or garlic bread.

How many safety inspectors does it take to light the bonfire?

Four. One to light the match and three to hold the fire extinguisher.

How many civil servants does it take to set fire to Guy Fawkes?

23. One to strike the match and 22 to fill in the paperwork.

How many Mafia hitmen does it take to light the bonfire?

Three. One to set fire to the effigy, one to watch his back, and one to shoot any witnesses.

How many aerospace engineers does it take to light the kindling sticks?

Zero. You don't need rocket science to start a bonfire.

How many Apple employees does it take to flame Guy Fawkes?

Five. One to light the match and four to design the T-shirt.

How many Microsoft programmers does it take to start the bonfire?

Zero. Microsoft declares darkness to be a new standard.

How many God-fearing, tax-paying, law-abiding men in Las Vegas does it take to light a bonfire?

How many fish does it take to set the Guy Fawkes bonfire burning?