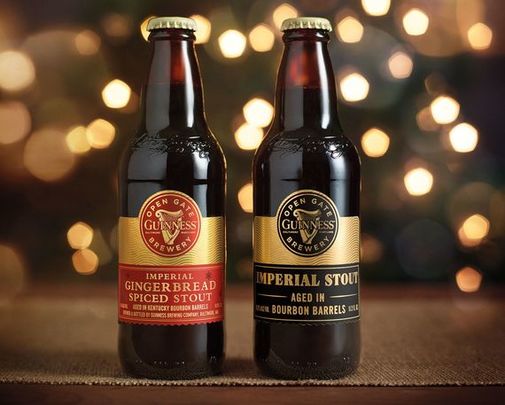 'Tis the season for two new barrel-aged beers from the Guinness Open Gate Brewery in Baltimore: Guinness Imperial Gingerbread Spiced Stout and Guinness Imperial Stout, both Aged in Kentucky Bourbon Barrels. These two festive limited-edition stouts are here just in time for the crisp late fall weather and the hopeful spirit of the holidays.

Tasting notes: This winter treat, with an 11% ABV, was brewed with allspice, ginger, cinnamon, and nutmeg, then aged in bourbon barrels.

Guinness Imperial Stout Aged in Bourbon Barrels was developed specifically with barrel-aging in mind, so it has a strong, robust body.

Tasting notes: This "roasty" beer also has a velvety mouthfeel, notes of chocolate, bourbon -- not to mention hints of coconut and vanilla -- and an oak finish.

Food pairings: With a 10.3% ABV, the stout provides a rich pairing experience and is perfect for steak, rib roast with rosemary and garlic, or chocolate desserts.

The best way to enjoy these flavors and aromas is to sip each beer slowly and savor it at a leisurely pace – with respect to their double-digit ABVs. 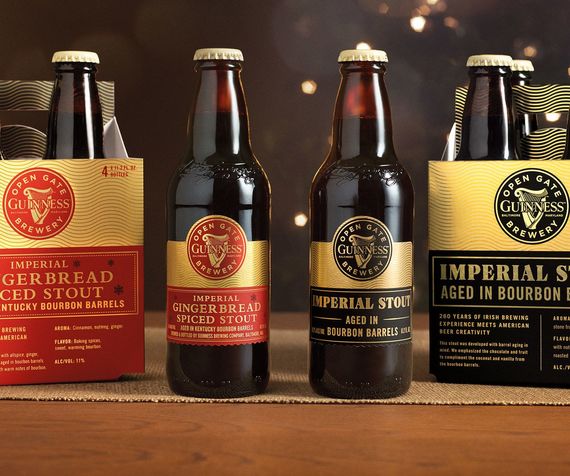 New additions to the barrel-aged series

"Barrels have been a part of Guinness brewing history for centuries, so we're excited to continue expanding on that tradition by becoming a center for the barrel-aging experience in the U.S.," said Sean Brennan, Senior Brewer at the Guinness Open Gate Brewery in Baltimore.

"It truly gives us the chance to create, experiment, and discover. We brewed Imperial Gingerbread Spiced Stout to evoke the warm, rich flavors of holiday spices, while we knew Imperial Stout needed to be showcased on its own after it was originally brewed as part of the Stock Ale blend last year."

While the holidays may look and feel different this year, whether you're enjoying Imperial Gingerbread Spiced Stout or Imperial Stout for the first time, gifting one (or both) of these stouts to the seasonal beer lover in your life, or sipping your favorite Guinness, please celebrate safely and responsibly with the ones you love in person or virtually.

Where to buy them

Guinness Imperial Gingerbread Spiced Stout and Guinness Imperial Stout can be found on shelves across the U.S. in 4-packs of 11.2oz bottles for a limited time at a suggested retail price of $19.99, and will be featured on tap at the Guinness Open Gate Brewery in Baltimore through the holidays.

To keep up to date with the latest news from the Open Gate Brewery and Guinness, make sure to follow @GuinnessBreweryUS on Facebook and Instagram or visit www.GuinnessBreweryBaltimore.com.