This lush, aromatic ham will impress your Christmas dinner guests. 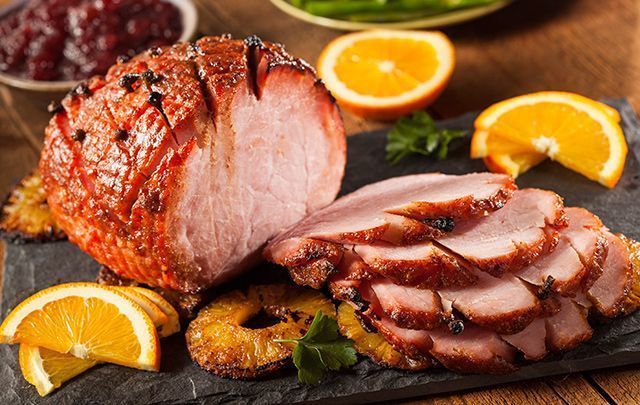 This lush, aromatic ham will impress your Christmas dinner guests.

Like most good Christmas ham’s this recipe is ALL about the glaze. The combination of sweet orange, sticky plum jam, and Asian star anise ticks all the boxes in terms of Christmas tastes.

Place the ham in a large pot and pour in the water along with the onion, star anise, cloves, and peppercorns. If the water doesn’t cover the ham, add more. Bring to the boil and then simmer steadily for 40 minutes per kg (3 hours) After the cooking time, turn off the heat and allow to cool in the liquid.

In a small saucepan, add the orange juice, jam, sugar, and star anise and cook gently until the sugar has dissolved and you are left with a slightly thick glaze. Leave to cool slightly.

Preheat the oven to 220°C. When the ham has cooled, remove from the liquid before removing the skin, exposing the fat and scoring diagonally with a small sharp knife. Place the ham in a roasting tray and brush the plum glaze over the top of the ham. Push the cloves into each cross. Bake for 20 minutes or until golden on top. Remove from the oven and allow to cool slightly before slicing thinly to serve.