It's National Blueberry Day! Here's the perfect recipe to mark the day for all you chocoholics! 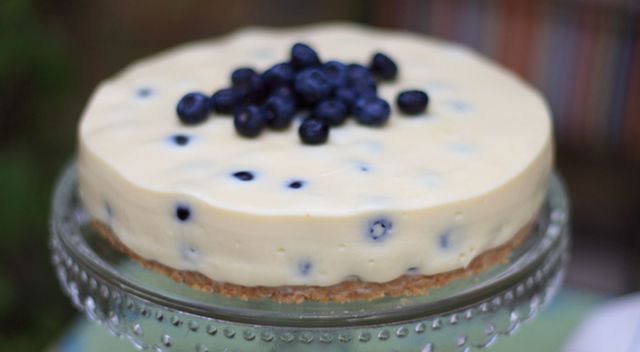 This makes a wonderfully creamy and rich cheesecake. A perfect make-ahead dessert, prepare it in advance and pop it in the fridge.

- Bash the biscuits in a resealable bag with a rolling pin or any other blunt instrument you can do serious damage with, until you have fine crumbs. Place the crumbs in a large bowl.

- Melt the butter in a large pan then add to the biscuit crumbs and mix to combine. Tip the butter and biscuit mix into the base of the springform tin and press down with the back of a spoon. Cover and place in the fridge while you prepare the rest of the ingredients.

- Place the chocolate in a heatproof bowl then set it over a small saucepan of barely simmering water, making sure the base of the bowl does not touch the water, and gently melt, stirring occasionally.

- Beat the cream cheese, cream and mascarpone in a large bowl with a wooden spoon until well combined. Stir through the white chocolate and lastly fold in the blueberries. Spread the mixture evenly over top of the biscuit base, cover and place in the fridge for at least 2–3 hours.

- Remove the cheesecake from the tin and serve in generous slices.

Donal demonstrates how to make this chocoholic delight in the video below:

Donal Skehan grew up in Howth, Co. Dublin. Born in 1986, to a family of food lovers, at the age of four he flipped his first pancake and been in the kitchen since!

After Starting one of Ireland’s first food blogs in 2007, he was catapulted to stardom with hit TV series on BBC, Food Network, RTE & FOX with accompanying best-selling cookbooks.

Donal has released eight cookbooks, including his latest “Meals in Minutes”, released in the fall of 2018. He is currently working on his ninth book with Hodder UK for release in September 2019.

Launched in Spring 2014 under Jamie Oliver’s Food Tube Network, Donal’s YouTube channel is the fastest-growing Irish food channel in the world with over 45 million views! The channel is now entirely managed by Donal and focuses on promoting accessible home cooking to a dedicated audience of almost a million food fans.