Chicken wings all day, every day. 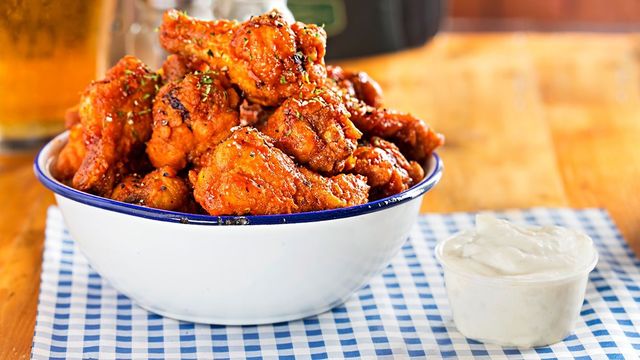 Finger-lickin' good! Where to get your chicken wings in Dublin. Getty

Who doesn't love chicken wings? Dublin is jam-packed with so many places that offer seriously good wings that it's sometimes hard to pick which restaurant to go to, so we've created a list of our five favorite spots.

You could walk into nearly any eatery in Dublin and find chicken wings on the menu, but not all wings are created equally. As the perfect food for an after-work bite with a sneaky pint, wings hold a special place in our heart, so there's nothing more disappointing than getting a lackluster portion.

To make sure you're satisfied with your wings, we've rounded up five of our favorite spots in Dublin for you to head along to and indulge in some good old-fashioned wings. Read on to find out where we think you should get your wing fix this week.

Dubliner's love their wings and Wishbone definitely has some of the best. With its pleasantly short menu that includes old favorites alongside innovative flavors, you're sure to be satisfied at this spot. While we're always delighted to find a particularly good buffalo wing, if you're feeling adventurous, we suggest you opt for the Spiced Orange or Salted Toffee Apple wings; they might sound weird, but you'll be pleasantly surprised at the taste.

Some of the action from our soft launch this week! Open full whack from noon tomorrow folks! @LovinDublin #food #Wings #Wishbone pic.twitter.com/MQkJhJre3o

Even though it has only just opened, Wing It on George's Street has already cemented itself as one of our favorite spots for wings. The company's homemade sauces are well-known for being some of the tastiest around, with Wing It's buffalo wings even crowned Best Wings at Bray's 2017 Wing Fest (which returns this year from July 19th-20th). With 16 flavors and regular, boneless and vegan wings available, there's definitely something for everyone available on the menu. If you can't make it to the city center location, Wing It's sister location opened in The Square Tallaght in 2014 and offers the same delicious selection of chicken wings.

We're lucky enough to be based just around the corner from Fowl Play, so we love popping in for some sneaky lunchtime wings. Andy Noonan's stellar barbecue joint is a hidden gem, specializing in meat cooked on a charcoal rotisserie or over their Texas wood-fired smoker. While there are lots of options on the menu, we love the cherrywood smoked free-range wings, which come in two flavors: Louisiana Hot and Alabama White BBQ.

This authentic slow-n-low barbecue joint started out as a small stall and has since grown to include two Dublin locations, as well as making their own sauces. Offering great food at extremely reasonable prices (check out their stellar student deal, which is only €6.95 for a main and a side!), Smokin Bones has a variety of options on their menu, but their wings are what really make them stand out. There are six varieties of sauces available, varying from mild to extremely hot, so order with caution.

Skerries might be a bit of a trek from the city center, but once you've tasted Blue Bar's wings you'll be willing to make the journey all the time. Known for its great drinks selection and atmosphere, Blue Bar is one of Dublin county's best-hidden gems. The portion of wings is absolutely massive and the sauce hits all the right notes. Definitely worth the trip!

Did we miss your favorite wing joint? Let us know in the comments below.