This video from Connemara Mountain Lamb in Galway of sheep being herded through an Irish village gives a completely different meaning to the term rush hour traffic! 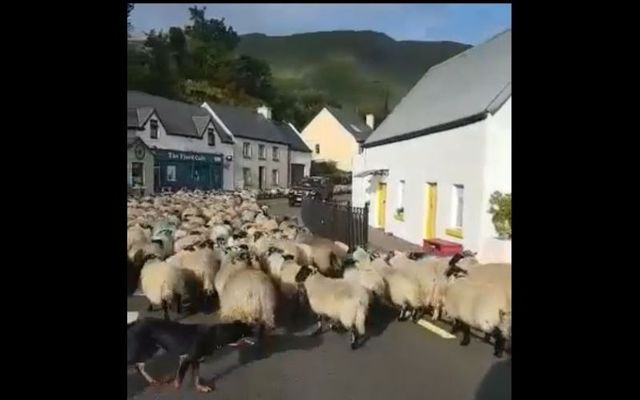 A video of a huge flock of sheep being herded through a small village in Ireland will have you in awe.

The video shows a flock of over a hundred sheep being herded through the village of Leenane on the Northern edge of Connemara, County Galway.

Around six dogs help herd the sheep alongside the local farmers who can be heard chatting in the background of the video.

"It's the biggest crowd you'll see in Leenane for a long time," one of them quips.

Further up the village, the dogs have to work harder to keep the sheep under control darting from each side of the flock to keep them going in the right direction.

Their skill is impressive to watch as they also listen to orders from the farmers who whistle and shout instructions to them.

The video, which was captured by local business "Commemara Mountain Lamb" in August 2019, was also shared by the Visit Galway Facebook page and has been viewed 266K times.

Leenane, which is situated at the head of Killary harbour, nestles under the Maamtrasna and Maamturk mountains on the Galway-Mayo border.

Since prehistory, the area has been inhabited, evinced by ancient tombs and the potato ridges climbing the mountains.

Leenane is famous for the stunning and varied beauty of its location and it's because of this the area has been attracting artists, sportsmen, geologists, and leisure seekers for over 150 years.