Wild Mountain Thyme's trailer, starring Emily Blunt as an Irish redhead, is stirring up quite the reaction online. 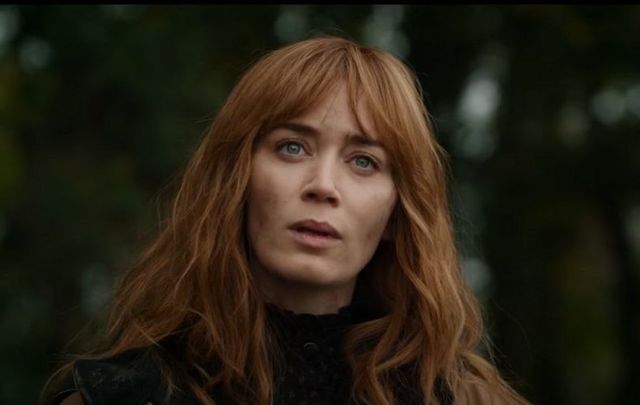 We could have a new champion for the worst Irish accents in a movie judging by the newly-released trailer for Wild Mountain Thyme, starring Jamie Dornan (why, Jamie, why?), Emily Blunt, and Christopher Walken.

The trailer for Wild Mountain Thyme, an adaptation of the Irish play "Outside Mullingar," debuted online on November 10 and it's already stirred up quite a reaction.

RTE Entertainment summed it up well with their headline “Irish accent emergency declared after Wild Mountain Thyme trailer," while Donald Clarke wrote for The Irish Times, "What in the name of holy bejaysus is this cowpat?"

“The headstrong farmer Rosemary Muldoon (Emily Blunt) has her heart set on winning her neighbor Anthony Reilly’s love. The problem is Anthony (Jamie Dornan) seems to have inherited a family curse, and remains oblivious to his beautiful admirer.

“Stung by his father Tony Reilly's (Christopher Walken) plans to sell the family farm to his American nephew (Jon Hamm), Anthony is jolted into pursuing his dreams in this comedic, moving and wildly romantic tale.”

In the trailer, Jon Hamm, who (thankfully) plays an American, says: "I don't understand you people. Why do you make everything so hard? You just seem to accept these crazy things."

You can watch the much talked about trailer for Wild Mountain Thyme, which was filmed in Co Mayo in the west of Ireland, here:

Judging by the trailer and synopsis, Wild Mountain Thyme has all the hallmarks of a cheesy Irish rom-com  - an emotionally stunted Irish farmer, a stubborn redheaded Irish beauty, a battle over the family farm, an American cousin who pays a visit, and sweeping shots of Ireland’s lush green landscape.

Stunningly, as a brief shot of New York City in the trailer proves, the film is set in modern times, as pointed out on Twitter:

The accents in ‘Wild Mountain Thyme’ aren’t as upsetting as the notion that a John Hind Begob And Begorrah, Sure We Haven’t A Sink To Wash Our Faces Oireland apparently exists on the same timeline as a post-9/11 New York pic.twitter.com/OHvDZhADjg

It’s impossible to nail down when that Wild Mountain Thyme is set. Emily Blunt dresses like she’s on the run from Cromwell but then it’s also post 9/11 somehow? pic.twitter.com/3VTs3pm173

Matching what appears to be a corny Irish plot are some brutal attempts at Irish accents. British actress Emily Blunt, who stars as Rosemary Muldoon in the flick, told People recently that she sought help from co-star Jamie Dornan, himself a native of South Belfast in Northern Ireland (a completely different accent, in fairness), for help: "I'll admit, I'm sure I had a tougher time with it than he did initially, but he's not usually one to give people tips, he's the most unpresumptuous person ever.

"But he assured me that I sounded Irish and I'm going to believe him. So if he's wrong, I'm going to blame him for any backlash on my accent. He has assured me it was a great Irish accent. We'll see."

Dornan said: "We were both terrified, I was like, no, we're going to be good,"

Irish people reacted in typical, witty fashion to the newly-released trailer over on Twitter:

Dublin Airport had some thoughts:

There’s fashion police
Grammar police
We even have airport police
Is there such a thing as accent police?
If so, somebody better call ‘em.
On the upside, Ireland looks nice. pic.twitter.com/lHrR5cWlwq

As did the Leprechaun Museum:

Even we think this is a bit much #WildMountainThyme https://t.co/Pl7SA4JoK6

The Irish Credit Union insinuated the Irish accents were beyond redemption:

We're not even sure a credit union loan could save those accents.. 👀#WildMountainThyme https://t.co/4Qtc2Zro5w

Strong words from one Irish viewer:

This comment on the #WildMountainThyme trailer says it all really. pic.twitter.com/IP4chJp1Sb

A hefty price to pay:

Look, Wild Mountain Thyme is clearly the price we have to pay for doing the diddedly-eye “they’re our people” shite with @JohnKingCNN and @JoeBiden

It’s just that none of us expected to be presented with the invoice for payment so quickly.

Leap Year: I'm the most offensive film to ever be based in Ireland

And, of course, Irish comedy group Foil, Arms and Hog couldn't let the opportunity to re-up their "Irish Film" bit pass by:

Wild Mountain Thyme arrives in theaters and to on-demand streaming services on December 11.