What song did John F Kennedy ask Judy Garland to sing to him on the phone?

A new book reveals "The Wizard of Oz" star's friendship with the president. 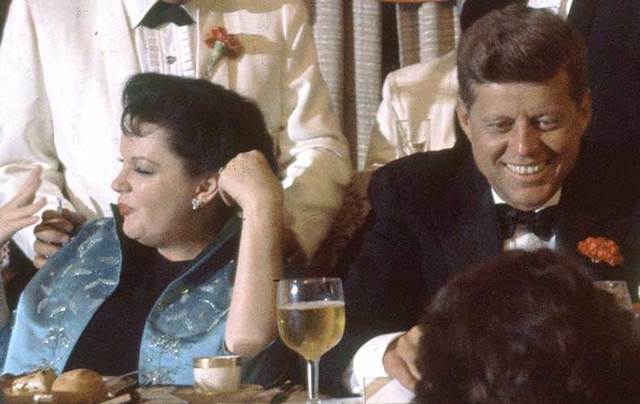 A new book, about Judy Garland, has revealed that President John F. Kennedy would often call the star and ask her to sing her most iconic song, “Over the Rainbow,” over the phone.

A new memoir by "The Wizard of Oz" star’s third husband Sid Luft, which was crafted from notes Luft left unfinished before he died in 2005, tells how Garland was introduced to JFK by Peter Lawford and his wife Patricia, Kennedy’s younger sister, when Kennedy was a junior senator from Massachusetts.

“JFK was young, lanky and extremely outgoing,” writes Luft in "Judy and I: My Life with Judy Garland." “He asked Peter and Pat to introduce him to ‘Dorothy’ in the flesh.”

Detail from the cover of "Judy and I: My Life with Judy Garland" by Sid Luft.

Garland and Kennedy struck up a friendship, and as Luft wrote: “In the coming years, JFK would ring Judy from either the White House or Camp David and ask her to sing to him over the telephone.”

“He’d request ‘Over the Rainbow,’” continued Luft. “Judy was located somewhere in New York and obliged the President with several renditions of his favorite melodies.”

Garland and Sid Luft’s son, Joey Luft, remembers how excited his mother would get whenever the president called.

“I remember he called her one time. I think it was after the election and she was jumping up and down in the living room. She campaigned for him and they were pretty close,” he said.

In the book, Sid Luft also shares memories of the parties he and Garland attended at the Lawford home.

“It was at the Lawford’s beach house that I was introduced to grass,” Luft wrote. “The scenes at the Lawford’s were heady – at times Jack was there or Teddy or some other member of the Kennedy clan. Peter knew damn well if he brought girls around, Jack would take over. He’d steal any girl in sight.”

Read more: What did a young John F Kennedy look like during World War II?