Watch the 40th Irish Post Awards on IrishCentral, all the way from London

Bob Geldof, Johnny McDaid, Karren Brady and Imelda May among those honored at the star-studded ceremony. 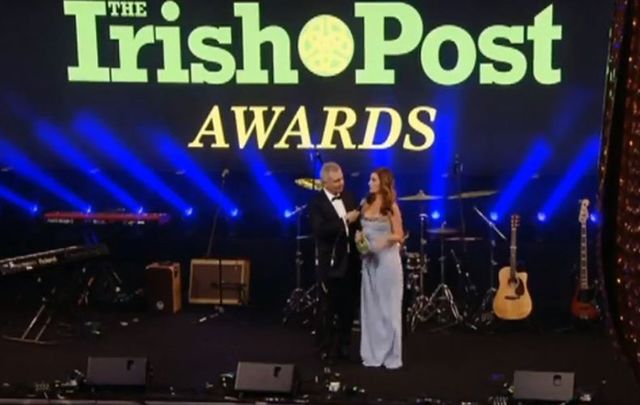 Bob Geldof, Johnny McDaid, Karren Brady and Imelda May were among those honored at the star-studded ceremony

Incredible Irish people making a difference, including Bob Geldof, Johnny McDaid, Karren Brady and Imelda May, were honored at the Irish Post’s 40th Award ceremony in London on Thursday. The prestigious Irish community event was hosted, once again, by renowned broadcaster and TV personality Eamonn Holmes.

Posted by IrishCentral.com on Thursday, November 23, 2017

Seven winners were presented with awards. Here’s a rundown:

The Dublin-born but Derry-raised star is also a prolific songwriter and producer, who is behind a wide array of recent chart hits – including Ed Sheeran’s Shape of You, which is now one of the most popular singles of all time.

The Skibbereen pair sealed silver in the lightweight men’s double sculls and won the nation’s heart with their relaxed yet entertaining post-race interviews and their famous “pull like a dog” quote.

The Dublin musician and philanthropist became world famous after staging Live Aid at Wembley Stadium in 1985.

Lead singer of the Boomtown Rats, Geldof has become known as a tireless activist, particularly against poverty in Africa and has been nominated for the Nobel Peace Prize.

He is also a successful businessman, largely in the communications and media sector.

Known to millions through her starring role as Lord Sugar’s trusted boardroom advisor, Baroness Brady is the Vice-Chairman of West Ham United FC, a Senior Non-Executive Director on the board of Simon Cowell’s Syco Entertainment and Chairman of Topshop.

She is also the daughter of self-made Irish millionaire Terry Brady.

- Imelda May - Artist of the Year Award

Having sung the Irish national anthem this summer in Las Vegas to a global audience of millions before the Conor McGregor v Floyd Mayweather fight, this year Imelda May has found a new groove with a new look and a new album.

The Dubliner will also give a special performance this evening.

- The Outstanding Contribution to the Community Award and the Building Britain Award, will both be announced during tonight’s ceremony

No less than five live music performances are due to take place during tonight’s event, including Imelda May’s.

Folk will meet rock when two of Ireland’s most exciting bands join forces to headline the red-carpet ceremony. Kodaline and Beoga will perform exclusively at the event.

Also on the bill is award-winning artist Damien Dempsey, who has won several prestigious Irish Meteor Awards over the years.

Country music star Lisa McHugh is also on the line-up. Glasgow-born, to Irish parents, McHugh is famed for her pop Country and Irish music style.

More than 1,000 people will enjoy a front row seat to all the action at tonight’s event, which takes place at the Grosvenor House Hotel in Park Lane.