U2, who is teasing new music, is set to re-release "All That You Can't Leave Behind" for its 20th anniversary in October. 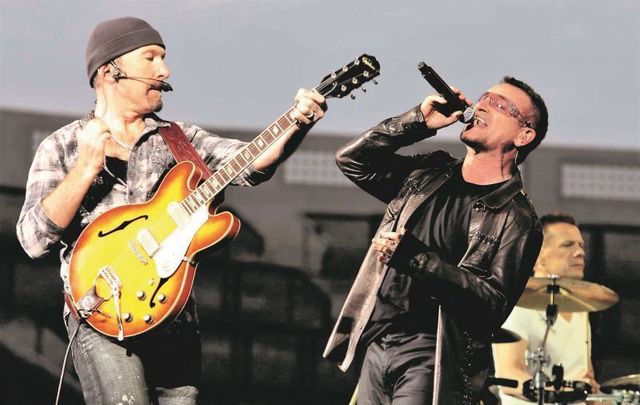 U2 rocking out at Dublin's Croke Park in 2009. RollingNews.ie

It's a sure bet that tens of thousands of us aren't going to be cramming into indoor or outdoor venues anytime soon, but thankfully U2 has some new music in the pipeline that one day we can look forward to.

The Edge told Jo Whiley during an interview on BBC Radio 2 last week that he and Bono had been hard at work creating new songs for a potential new U2 album, at least before COVID struck.

Edge, who’s married to a native Californian Morleigh Steinberg, also revealed that he’s been seeing out the Covid-19 pandemic in his wife's home state, a decision he had to make PDQ after much of the world started to lockdown in mid-March.

''I was actually working on some new songs with Bono and I had a decision--am I going to go to Dublin or am I going to head to California where my wife was, so I opted to head for the wife which I think was the right call,” Edge said.

"Cause literally within two days they'd shut all flights into America so I snuck in and spent the first part of the lockdown with Morleigh in California and then came to Dublin for early May and was in Dublin for a while. I felt very fortunate...overall I felt like one of the really lucky ones.”

New U2 music might be a while away, but next month diehard fans can look forward to the 20th anniversary updated re-release of U2’s album All That You Can’t Leave Behind, which introduced the world to hits like “Beautiful Day” and “Elevation.” The drop is due on October 30.

How do the Fab Four–Edge, Bono, Larry Mullen, and Adam Clayton – stay connected during a lockdown? Edge says he’s the Zoomer-in-chief, just about.

"I'm known as the technology genius, but basically that's because I know how to fix the printer. That about the extent of my technology skills, but to say that sets me on a whole different level to everyone else in the band should explain what you're dealing with so yeah, it has been challenging at times,” he added.