WATCH: U2’s Bono and The Edge perform acoustic snippet of “Stairway to Heaven”

Bono and The Edge performed the classic rock song as part of RTE's "Songs from an Empty Room" benefit, which U2 donated €200k to. 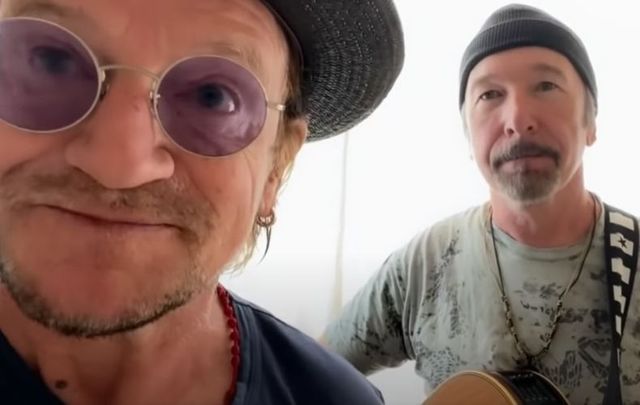 Bono and The Edge performed an acoustic version of "Stairway to Heaven" as a thank you to their dedicated road crew. U2, Facebook

Irish rockers Bono and The Edge performed an acoustic bit from “Stairway to Heaven” as a thank you to their Irish road crew during RTE's recent "Songs from an Empty Room" benefit broadcast.

The event, organized by RTE in support of Minding Creative Minds and the Association of Irish Stage Technicians Hardship, saw Irish performers playing from some of the country's most iconic venues, which have been largely closed to audiences in recent months due to coronavirus.

In the video that was shared to U2's Facebook page, a bespectacled Bono says: “Ok, so, Irish road crew, best in the world, that is for sure, we can say that. And the U2 group, we’ve been all over the world, and that is well-known.

“There’s one annoying aspect of an Irish crew that has to be said - wherever you go in the world, whatever venue you’re playing — whether it’s the Olympia or 3 Arena or Madison Square Garden — you walk into the venue and it’s a big moment, and you’ll hear a song that we said, ‘We’ll never, ever play this.’

(In the background, The Edge begins the opening chords of “Stairway to Heaven.”)

“And that’s right, ‘Stairway to Heaven.’ These professionals believe they play this better than the band. And you know, it might be true.

'We said we’d never play this…' This one's for the crew. #SongsFromAnEmptyRoom #stairwaytoheaven