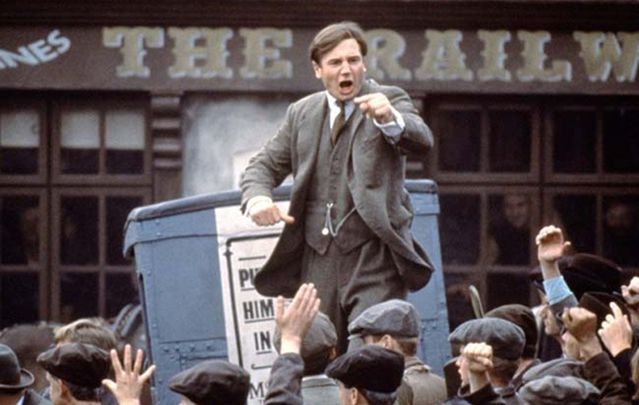 Here are our choices of the top ten action-packed Irish movies:

As he says himself in the movie, he was the “Minister for Gun Running, Daylight Robbery, and Bloody Mayhem” which made for an exciting, albeit sad, action-packed movie.

IMDB says of the movie, “Michael Collins plays a crucial role in the establishment of the Irish Free State in the 1920s, but becomes vilified by those hoping to create a completely independent Irish republic.”

Irish American actor Harrison Ford plays the role of CIA agent Jack Ryan who foils an assassination attempt in England by a splinter group of the IRA. Of course he does, he’s Indiana Jones for Pete’s sake!

Ryan’s family becomes the target of Sean Bean’s character, Miller, who seeks revenge for the death of his brother.

As IrishCentral has pointed out before, Brad Pitt’s Northern Irish accent in this movie is somewhere around excruciating to listen to, however, this isn’t a half bad action movie.

The movie tells the story of an Irishman (Brad Pitt) who moves to the US and stays with a NYPD cop (Harrison Ford). The NYPD cop soon finds out that his lodger is an IRA assassin.

This Oscar-winning movie tells the story of an undercover cop, Billy Costigan, who investigates mob boss, Frank Castello, played by Jack Nicholson. This mob boss’ character is based on James “Whitey” Bulger, the 'capo' of the Winter Hill Gang in Boston.

Matt Damon plays an insider who rises through the ranks of the Special Investigation Unit and threatens Costigan’s operation.

I don’t think an action movie needs any more credentials than Jeff Bridges and Tommy Lee Jones starring, but here we go. This movie follows Jeff Bridges’ character, bomb squad instructor Jimmy Dove, who is haunted by his past back in Ireland. His former friend is a mad bomber played by Tommy Lee Jones who seeks out Jimmy and targets his loved ones for revenge.

Set in 1863 in Five Points New York, although historically probably not spot on, the brutal gang fights in this movie are spectacularly shot.

This Martin Scorsese movie is based around New York battles between Irish immigrants and native Protestants.

Irish American Mickey Rourke plays an IRA bomber who leaves the group after he accidentally kills a bus full of children. The IRA want him back and a local gangster needs him, too, in order to take out a rival to his power. Although Rourke’s accent is shockingly bad, the movie also stars a very young Liam Neeson which will almost make up for it.

Bruce Willis, who plays a lone gunman, stumbles in to a Texan town called Jericho where Irish and Italian gangs are feuding. Willis uses the opportunity to make a profit from the two gangs until a good Mexican woman changes his ways.

Ireland’s former Ambassador for Culture, Gabriel Byrne, stars in this action packed movie about a courier at the D-Day Courier Service. He accidentally finds a pile of money in his regular delivery. He does some digging only to discover that the messenger company is a front for a drug ring.

A reformed drug user himself, he sets out to crack the lethal ring.

Yes, the Guy Ritchie-directed gangster movie is London based, but Brad Pitt’s character, Mickey the Irish Traveller, has some of the best boxing moves you’re likely to see. He’s also hilarious and utterly incomprehensible.