Top ten Irish mob movies that lit up the screen

IrishCentral's favorite Irish mob movies, from classics like 'Angels with Dirty Faces' to newer hits like 'The Irishman.' 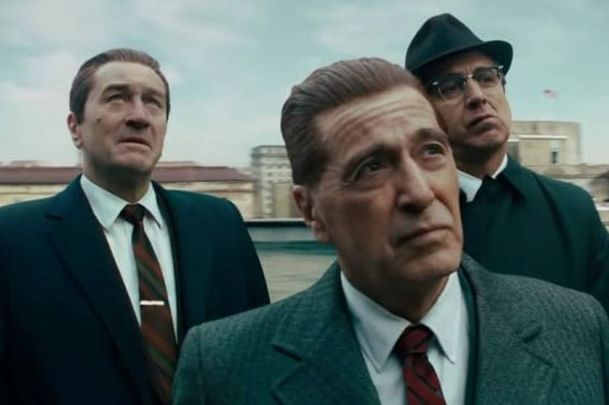 A still from "The Irishman." Netflix

The Irish mob is recognized as one of the oldest organized crime gangs in the U.S.

A sordid past and existence in almost every city across America has resulted in the Irish mob being the source of countless motion pictures.

Read on for a look at our top ten Irish mob movies that were influenced by the Irish immigrants and their corrupt dealings.

Starring Sean Patrick Flannery and Norman Reedus, Irish Catholic fraternal twins embark on a quest to take down a Boston mob all the while being pursued by FBI special agent Paul Smecker, played by Willem Dafoe. Written and directed by Troy Duffy, he said personal experiences inspired him to write the film.

Adapted from Charles Brandt's 2004 nonfiction book "I Heard You Paint Houses," The Irishman is directed by Martin Scorsese stars a dream team of Robert De Niro, Al Pacino, and Joe Pesci. In it, elderly Irish-American World War II veteran Frank Sheeran (De Niro)  recounts his time as a hitman for the Mafia.

Directed by Michael Curtiz, this early mob film stars James Cagney and Pat O'Brien as the dead in kids from the slums of New York whose troubled childhood sends them down very different paths in adulthood. After ending up on opposite sides of the law, one turns into a career criminal while the other transforms into a compassionate priest.

When Terry Noonan (Sean Penn) returns to his childhood home of Hell’s Kitchen in New York after a 10-year absence, he reconnects with his childhood pal Jackie, who is part of the Irish mob coincidentally run by his brother Frankie. Written by Dennis McIntyre, the film was partly inspired by the real-life Hell’s Kitchen mob known as the Westies.

Southie resident Irish boy Danny Quinn (Donnie Wahlberg) returns home from New York and gets stuck between two rival gangs. When he returns he finds his brothers out of work and his sister out of control. Torn between loyalty and law, family and the streets, he has to make some hard decisions.

A young hoodlum quickly establishes himself as a fearful character in Chicago’s underworld. This film marked James Cagney’s screen debut in a classic Irish mob movie. The classic gangster versus family tale tells the story of two brothers with very different agendas, one a bootlegger in the mob, the other a do-gooder out to reform.

When faced with the prospects of a long prison sentence, a gun-runner in Boston contemplates snitching on his friends so he can avoid jail time. Starring Robert Mitchum and Peter Boyle, a dramatic chain of events lead to the murder of Eddie "Fingers" Coyle.

Directed by Martin Scorsese, this is one of the best gang Irish mob movies of all time. Set in the 19th century in the Five Points district of New York, the all-star cast lineup includes Leonardo DiCaprio, Daniel Day-Lewis, and Cameron Diaz. The award-winning picture was inspired by Herbert Asbury's nonfiction book “The Gangs of New York.”

Directed and starring Ben Affleck, the film is set in his hometown of Boston. Four childhood friends rob a Cambridge bank, taking the bank manager hostage as a lifelong thief plans his way out of his criminal fueled life forever, all the while attempting to dodge the FBI agent trying to bring him down.