The unlikely kindred spirits of Jonah and Otto 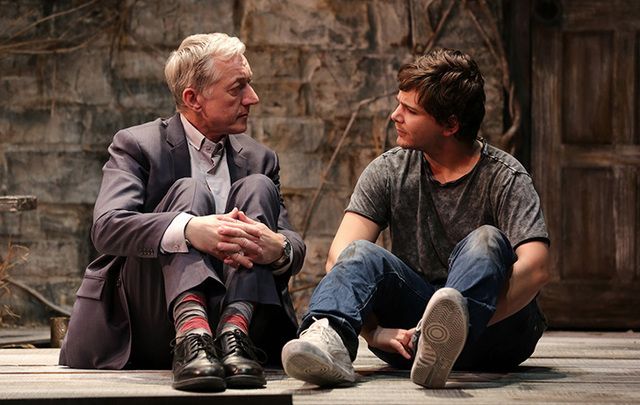 Sean Gormley and Rupert Simonian star in Jonah and Otto.

One night inside a walled garden in the south coast of England some time around 2003 two men meet. One is 26, the other is 62, and they’re both about as different from each other as it is possible to be.

In Robert Holman’s sparse two-hander Jonah and Otto, now playing at Theater Row in Manhattan, these wildly differing men encounter each other during the first and the last chapters of their respective lives with explosive results.

Directed by Belfast-born actress Geraldine Hughes and starring Sean Gormley as the elder man and Rupert Simonian as the younger, the play is about two lonely people whose lives have reached an complete impasse. The choice before them is a stark one now: to give up or go on? So the struggle that erupts between the two men grey mirrors the larger struggle to survive in a frequently hostile world.

If this place is Eden then it’s clear it has fallen. The wall behind them has partly collapsed, there’s a bare bench to rest on but little in the way of comfort or solace to be found here, unless you bring it yourself.

Holman’s play is a meditation on the unseen violence that’s done to souls simply by existing, but it’s also about the palpable violence done by wrong choices, bad breaks, paths taken and paths not.

As Otto, the stoic and mysterious older man, Gormley gives us meticulously timed character revelations that surprise or at other times shock. A man already so isolated that he is becoming a near ghost, he is startled by the unexpected arrival of Jonah, less than half his age but also reeling from the utterly exhausting business of living.

Age makes little distinction between them. Almost as soon as they encounter each other they realize they are in some ways kindred spirits. Their bone deep alienation from their peers, their families, their communities and themselves is the glue that pulls them together.

Otto is a clergyman who no longer believes in God. He lives a contemplative, isolated life, but the flame of belief has completely gone out of it. What remains is a deep, mostly unexpressed desire for love that at various times horrifies or even appalls him.

Jonah, although much younger, possesses far more insight into his foil, understanding what Otto wants long before he says it and deciding from moment to moment to supply or withhold it.

Neither character is gay, so it’s not strictly speaking a romance at all, although there is a growing emotional connection that undercuts their verbal jousts.

In Simonian’s hands Jonah alternates between charming and completely unreliable. He craves affection but recoils from its consequences. He wants to be loved but he wants to be left alone. He doesn’t believe in himself but he wants to desperately. He’s a million human souls wrapped in one.

As Jonah and Otto progresses it's also clear that the accretion of metaphor is really its main business. Where they are and who they are is less important than what they are contending with or trying to change: how to make a tolerable life out of a few found materials, and then how to keep it going once you have.

There’s more than a hint of Samuel Beckett in this pair’s exchanges. In particular there is the terror of getting something that is barely defined completely wrong. The anxiety actually overrides the thing itself.

Fear and paralysis are both metaphorical and literal in this cerebral drama. Director Hughes does well to focus on the physical, ensuring that both men risk something of themselves and reminding us that it will be consequential.

“We learn to love by listening to another person,” Otto says at one point, luminously. “Love is paying attention.”

The writing of this play leaves absolutely nothing to chance. Every sentence is carefully considered and carefully freighted with meaning. It’s a tribute to the actor’s skill and the director’s nimble interventions that it feels organic, coming from a deeply felt place, with real life consequences for its two hard-bitten protagonists.

Simonian magically inhabits his character, allowing the pain underneath the brash exterior to emerge convincingly. And Gormley shows us how his stricken character intuitively flees from the very things that will save him. The production sets all of this out lucidly, in a drama that knows what to conceal and what to reveal, challenging you – and its two lonely protagonists – only to risk yourself, only to connect.