The former James Bond takes on one of the best roles of his career in a ten-part TV show based on The New York Times bestseller and Pulitzer Prize-nominated novel. 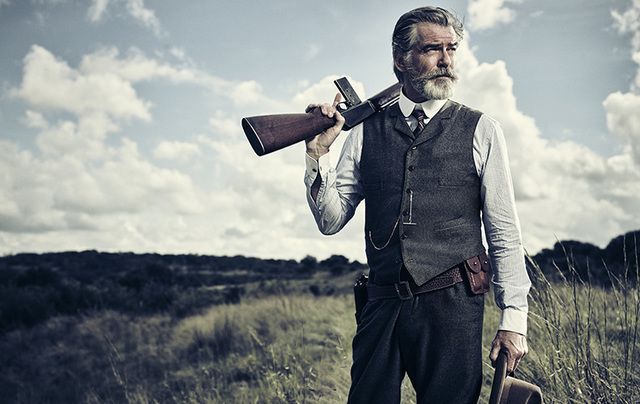 Based on the The New York Times bestseller and Pulitzer Prize-nominated novel, The Son is an epic family drama that spans 150 years and three generations of the McCullough family. Debuting on AMC on April 8, it also gives star Pierce Brosnan one of the best roles of his recent career as a cattle baron desperate to ensure his legacy by transitioning the family business into oil. Cahir O’Doherty views the new series and gives his verdict.

Good film roles are like buses -- you wait for years and then three arrive at the same time. That’s what’s happened for Pierce Brosnan, 63, who heads up three major new projects that taken together suggest another career renaissance for the Irish actor.

The first and most absorbing of these roles to date is in The Son, the new AMC series based on The New York Times bestseller of the same name, which sees him playing Eli McCullough, a cattle baron who’s making the late in life transition to oil baron in South Texas.

An epic tale of the Old West as it transitions into the American century, The Son is about a million miles from Brosnan’s days as Remington Steele and James Bond.

What Eli McCullough is not is, in any sense, a hero. Born on the same date as the Republic of Texas, he’s seen fights of all kinds and hasn’t lost his appetite for more of the same.

In this he is a different kind of man to his far more principled son Pete, who believes that people have the capacity to treat each other with basic decency, a thought completely foreign to his by-any-means-necessary dad.

Nevertheless, Pete loves his father and thinks his dark view of humanity belongs to the old days and should have been left at the frontier. Things come to a head when the Mexican revolution spills over the border and Pete is forced to defend his home, his family and his views about human nature.

“Your father is a simple animal Peter,” a Mexican neighbor explains. “He is untroubled by his conscience, he sleeps soundly, secure in his belief that men are as expendable as beef. Men like that are dangerous. Their view of the world can spread far, fast.”

McCullough is certainly a hard as nails character, and Brosnan brings him urgently to life.  But we learn that beneath his calm exterior he’s filled with anxiety about the collapse of the cattle industry because it spells the certain collapse of his ranch and the fortunes of his family.

There is no black and white in Eli’s outlook in other words, just anxious shades of grey that keep you guessing about his real inner nature and exactly what he’s prepared to do to maintain his power.

To add to the pressure cooker atmosphere, Eli’s next-door neighbors are a prosperous Mexican family, some of whom want to return Texas to its rightful Mexican ownership.

Handsomely filmed and epic in its scope, The Son does its source material proud, telling a tale that sweeps you up in the dynamism and danger of two separate but linked tales of the emerging United States. 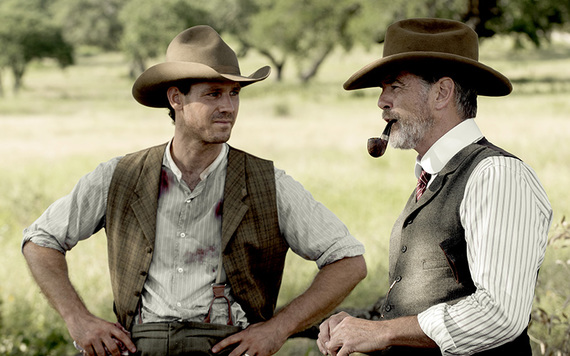 Henry Garrett as Pete and Pierce Brosnan as Eli in The Son.

In 1849 in south Texas, the show reminds us, three quarters of the state were still held by the Comanches. No one had ever taken an axe to a tree there, the streams were completely unspoiled, buffalo roamed freely. It was an unspoiled and untouched Garden of Eden.

That was also the reason that European settlers were arriving there in their thousands. They knew the dangers presented by the rapidly dispossessed Native Americans, but they also coveted the material rewards (and this was before they even knew it was oil rich). It was a powder keg that was set to explode.

Eli, we learn through a series of vivid flashbacks, has lost two families, and his response to the severance was to grow a large cattle ranch and after that ensure his legacy in the state by transitioning the family business into oil.

What The Son sets up is a meditation on human nature, but it hedges its bets by making the Native American and Mexican characters ancillary to white the patriarch and his family.

The Son gives us tantalizing glimpses into the struggles of the supporting characters, but it would be revolutionary -- and better drama -- if their concerns were giving equal airtime.

We know that Eli believes human nature is at its core brutal, driven by desire, envy and greed. We also know that those basic instincts reassert themselves lethally in times of war. It would bring a welcome freshness if those questions were being asked by more than a handful of rich men as the drama unfolds over time.

As Eli, Brosnan, a gifted actor, has been handed a remarkable antihero role that he plays to perfection.  If his character is not exactly a revelation it’s because we have been told this story, in a multitude of guises, since the first white hated cowboy had a gunfight with the first Indian in the Saturday morning serials that introduced the genre.

Eli runs his business and raises his children as though the whole of life is an unending battle. His toughness hides his deep love for his family, but it’s toughness that stems from the unexpressed fear that they might never have what it takes to survive and prosper in the world as it is.

It’s big news that Brosnan believes in the show enough to tackle its small screen presentation. He’s been a movie star for decades, and it’s obvious from his first scene that he believes in the role and the series.

The McCullough family fortune has been built on the corpses of dead Native Americans and Mexicans, and The Son flinches from showing us what that means in favor of a son trying to climb out of the shadow cast by his father’s drama that feels at times all too familiar by the end of the first episode.

In our own age when the prospect of order walls with Mexico is suddenly a current concern, there’s an added pitilessness to these quasi-biblical proceedings. Onscreen we see a lethal waltz between the drowned and the saved that seems fated to play out for years to come, without conclusion or an end in sight, with no clear victor but a mound of the vanquished.

As the bad guy you love to hate Brosnan, who stepped into the production when Sam Neill stepped out, holds a fine line between classic films like Giant and soap operas like Dallas, finding a middle way to navigate the character and the story with usually impressive results.

Accent work on the show varies wildly between characters though, making this part of South Texas an impressively multicultural experience in ways that distract from the actual lives and competitiveness of the feuding cultures that inhabit it.

But The Son succeeds best in what has aimed for, in telling a diverting tale that, if you don’t look too closely or ask too many questions, tells an approved version of the state’s actual history that the majority there can live with. The others died and The Son doesn’t really want to talk about it, sadly.