Netflix unveils the official poster for "The Irishman"

Netflix has released its official 'The Irishman' poster ahead of the film's debut at the New York Film Festival this month. 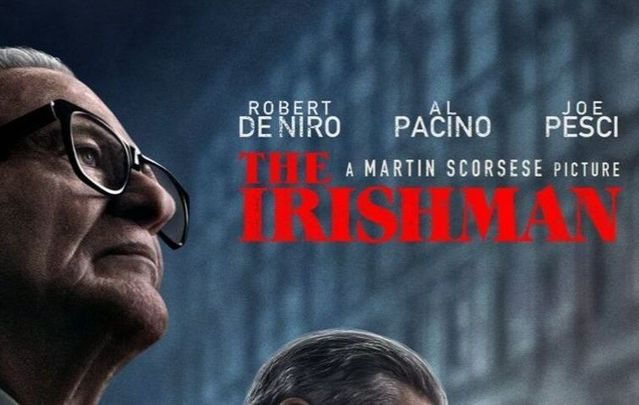 Netflix has released its official 'The Irishman' poster Netflix

"The Irishman" will hit Netflix the night before Thanksgiving

Netflix has released its official "The Irishman" poster ahead of the highly-anticipated film’s debut at The New York Film Festival later this month.

'The Irishman' poster was revealed on September 16 (Netflix)

Adapted from the book "I Heard You Paint Houses," Martin Scorsese's "The Irishman" brings together some of Hollywood's finest talent the 210-minute long film.

IndieWire reports on the limited theatrical run "The Irishman" will have ahead of its Netflix debut: “On November 1, it will open in Los Angeles and New York, followed by a platform release in the U.S. and the U.K. November 8, adding more theaters each weekend on November 15 and November 22.

“When it premieres on Netflix November 27, it will see ‘an expanded theatrical release in the U.S. and international markets.’”

Netflix’s synopsis of ‘The Irishman’ reads: “Robert De Niro, Al Pacino and Joe Pesci star in Martin Scorsese’s THE IRISHMAN, an epic saga of organized crime in post-war America told through the eyes of World War II veteran Frank Sheeran, a hustler, and hitman who worked alongside some of the most notorious figures of the 20th century.

"Spanning decades, the film chronicles one of the greatest unsolved mysteries in American history, the disappearance of legendary union boss Jimmy Hoffa, and offers a monumental journey through the hidden corridors of organized crime: its inner workings, rivalries, and connections to mainstream politics.”

You can watch the official trailer for ‘The Irishman’ here:

Are you excited for "The Irishman?" Let us know in the comments!