WATCH: Syrian celebrates his Irish citizenship with "Whiskey in the Jar" cover

Zack Abasi, a native of Syria who has been living in Ireland since 2015, celebrated his Irish citizenship with Thin Lizzy's 'Whiskey in the Jar.' 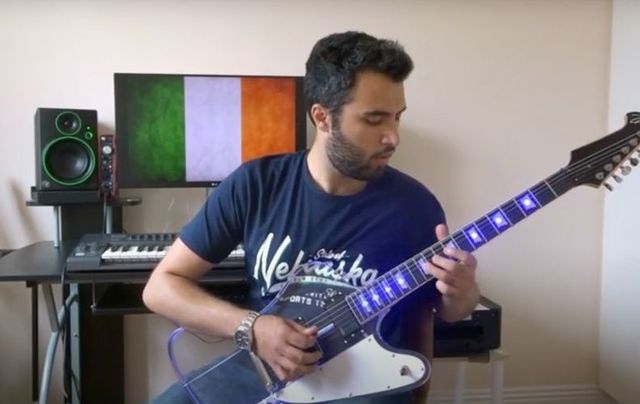 Musician Zack Abasi celebrated his Irish citizenship with a cover of Thin Lizzy's "Whiskey in the Jar." YouTube/Zack Abasi

A Syrian musician celebrated becoming an Irish citizen with a "mind-blowing" cover of Thin Lizzy's "Whiskey in the Jar."

Zack Abasi, who is originally from Syria but has been living in Ireland since 2015, recently became an official Irish citizen.

The talented musician, who lives in Dublin, decided to celebrate the occasion by performing a cover of the famous guitar riff from Thin Lizzy's "Whiskey In The Jar."

The famous song from the Dublin rock band, which was fronted by Phil Lynott, has been covered by many famous musicians, including Bryan Adams and Metallica.

Playing on a  custom-made guitar bearing his logo 'ZA,' Abasi performed over the Metallica cover of the famous Thin Lizzy guitar riff, with an Irish tricolour showing behind him on a computer screen.

A video of his performance, shared on Twitter with the hashtags #IrishCitizenship, #ProudIrish, #SyrianIrish and #ThinLizzy, has gone viral.

According to The Irish Post, Abasi's friend Razan Ibraheem, a journalist in Dublin, shared the video clip to social media, where she wrote:

"When my friend Zack Abasi from Syria got his Irish citizenship recently.. he decided to celebrate it in a different way.. or in an authentic way like Thin Lizzy Whisky in the Jar way."

Many Irish online praised Abasi's performance and congratulated him on his Irish citizenship. Some responded by asking him to do renditions of their favorite songs.