Susan Sarandon wishes she had an affair with Liam Neeson

“Oh my god, the man is perfect! He’s handsome, he’s charming, he’s Liam Neeson, who doesn’t dream of that?” 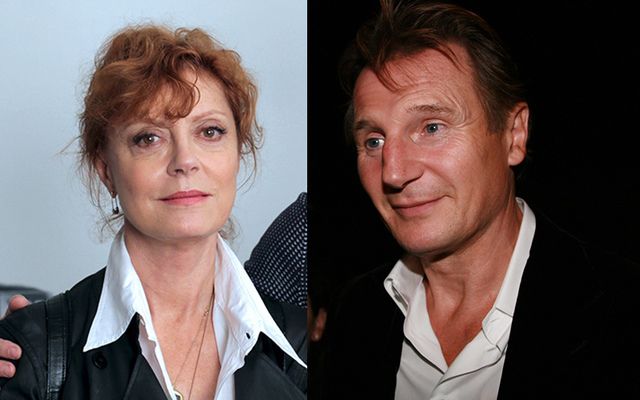 Susan Sarandon said she wishes rumors of an affair between her and Liam Neeson were true. Wikimedia Commons / Complilation

Susan Sarandon has spoken up about just how much she wishes rumors of an affair between her and Liam Neeson were true.

“Who wouldn’t want to be in a romance with Liam? Oh my god, the man is perfect! He’s handsome, he’s charming, he’s Liam Neeson, who doesn’t dream of that?” she enthused in an interview with the Irish Sun.

This all got started when Neeson hinted he was dating an “incredibly famous” woman.

In the lead-up to Valentine’s Day 2016, in an interview about the documentary he narrated on Ireland’s 1916 Easter Rising, Neeson was asked if he had any plans for Valentine’s Day.

The Co. Antrim born star, who lost his wife, fellow actor Natasha Richardson, in 2009, replied “I'll send out a few bunches of flowers to various people and I usually just say 'from an Irish admirer'."

When pressed and asked if there was anyone special he said "Yes, but I'd embarrass her if I said her name, she's incredibly famous. I'll have to do my best for her. It's amazing how far a simple bunch of freshly picked flowers will go in a lady's life, I find."

Tabloids ran with the story, linking Neeson to a many different famous women, including Charlize Theron, Halle Berry, the much younger Kristen Stewart, and, of course, Susan Sarandon.

“I loved that! It was a week of heaven,” she told the Sun. “I first read the headline, ‘Liam is romancing Susan’, and I thought firstly, ‘that’s news to me!’ And then, ‘I’m not going to tell the truth. I’m more than happy for everyone to think that.’”

She even considered adding fuel to the rumor’s fire. “I hoped it would run and run. I should probably have stoked the fires, threw out some cryptic tweet.”

But when he saw the frenzy his words had created, Neeson confessed he has made up the story - much to Sarandon’s disappointment.

“And then the truth came out. Oh well! Had to face reality again. But for those few days, it was pretty special,” she said.

“Of all the rumours, of all the stuff written about me, that was possibly the best. So why couldn’t it be true? Really, I mean c’mon universe, make this one happen!”

Sarandon is currently starring as Bette Davis in the FX series The Feud, which chronicles the acrimonious relationship between screen legends Bette Davis and Joan Crawford.

Neeson recently wrapped up filming the special sequel to Love Actually, which will help to raise funds for Red Nose Day in the UK, and also recently finished filming The Commuter, another one of his now signature action/thriller blockbusters.

Do you think Liam Neeson and Susan Sarandon would make a good pair? Have your say in the comment section, below.