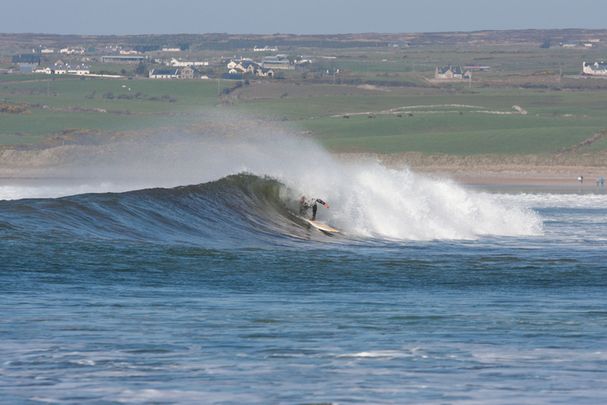 Surfing the waves at Lahinch in County Clare iStock

A new film about two Irish surfers growing up in the west coast of Ireland is set to be released at this year’s Shore Shots Irish Surf Festival, in County Sligo.

The short film entitled Winter Tides focuses on Gearoid McDaid and Ollie O'Flaherty. The film brings to light how growing up on Ireland’s rugged western coastline has helped them become two of country’s premier surfing athletes.

The film is directed by Jonny Mac Cann and is narrated by well known Irish sports presenter and journalist Joanne Cantwell. The film hopes to capture the amazing surfing coastline on offer right on people's doorstep and to encourage more people to take up the sport.

"The west coast of Ireland is home to some of the most amazing surfing in the World. What would it be like to grow up on these shores? And surf these seas everyday? You're about to meet two people who did."

Both McDaid and O’Flaherty have made notable impacts on the international surfing scene over the past number of years. McDaid has been steadily climbing the rankings in Europe since 2015, currently sitting at number 22 overall.

O’Flaherty has chosen a different path focusing on big waves, which has seen him earn multiple Billabong XXL awards since 2012. He also runs a successful surf academy in Lahinch, County Clare.

The Shore Shots Irish Surf Festival is an annual two day event which is in its fifth year. The aim of the festival is to immerse spectators in cutting edge surf films, art, photography and to inspire people through interactive talks, all while promoting surfing.

The west coast of Ireland is home to many fantastic beaches that offer some of the best surfing conditions in the world for all levels of ability. Bundoran in County Donegal, Mullaghmore in County Sligo and Lahinch in County Clare are just a few of the country’s best surfing areas.

The 2017 Shore Shots Irish Surf Festival will be take place in County Sligo between April 22 and April 23.

What is your favorite beach in Ireland? Let us know below.