Mark Gordon Pictures has acquired the rights to "The Dive", which tells the story of a two-person submarine that became stranded 1,575 ft below the surface of the Atlantic Ocean off the coast of Cork. 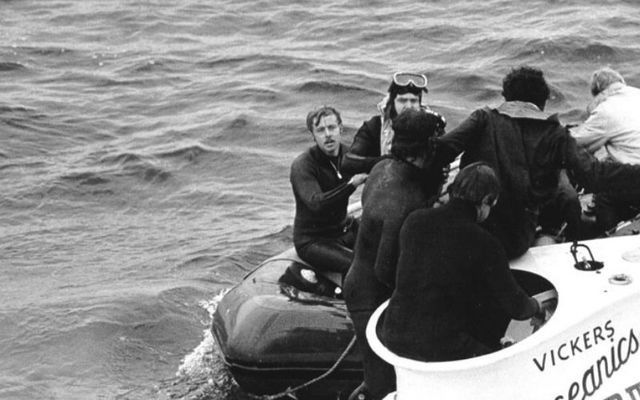 The thrilling true story of a gripping submarine rescue 150 miles off the coast of Cork is set to be made into an action movie.

Mark Gordon Pictures has acquired the rights to Sunday Times author Stephen McGinty's new book, "The Dive", which tells the story of a Pisces III - a two-person submarine that wound up stranded on the floor of the Atlantic Ocean while laying telephone cables in 1973.

The tiny submarine was stranded a full 1,575 ft below the surface, meaning that deepsea divers were unable to reach it with towing ropes. Instead, a second submarine was required to extract Roger Mallinson and Roger Chapman from the ocean floor before their 72 hours' worth of oxygen ran out.

The rescue effort soon became an international one and resulted in the deepest submarine rescue in history.

The multinational rescue effort lasted approximately 76 hours and involved blue-collar workers and research teams from Canada, the United States, and the United Kingdom.

For three days in the summer of 1973, the world watched with a sense of trepidation as the hastily-assembled multinational team worked to pull the two men from the ocean floor. Several attempts to rescue the two men failed due to a wide range of malfunctions, leaving the rescue team in a harrowing race against time.

Less than 20 minutes of oxygen remained by the time the Chapman and Mallinson were pulled from the water by a British submarine and a US Navy CURV-III vessel.

McGinty's thrilling 369-page account of the gripping rescue was released in the UK and the US on June 10 and now looks set to be heading for the big screen after Mark Gordon Pictures acquired the rights to the story.

Beth Pattinson will also produce the upcoming film, while "The Crown" writer Edward Hemming will adapt McGinty's book for the big screen.

Gordon has worked as a producer on several critically-acclaimed works, including "Saving Private Ryan", "Steve Jobs", and "Molly's Game", and McGinty said that he was confident that the story is "in the best possible hands".

"I’m delighted to be working with Mark, Beth, and Ed as they adapt The Dive into a movie," McGinty told Deadline. "The story of the rescue of Pisces III is one of the great tales of ocean adventure: when a band of blue-collar workers from Canada, America, and Britain pulled together to rescue two men from a crushing depth never attempted before."

Pattinson said that the story had to be told on the big screen.

"From the opening pages of Stephen’s book, it was immediately obvious that this was a story that needed to be told on screen. Not only is it breathtakingly tense but it’s also a deeply emotional story both about the men submerged and those frantically trying to save them," she said.

McGinty has penned several historical non-fiction books and was the co-producer of the BAFTA-winning documentaries "Fire in the Night" and "Dunblane".