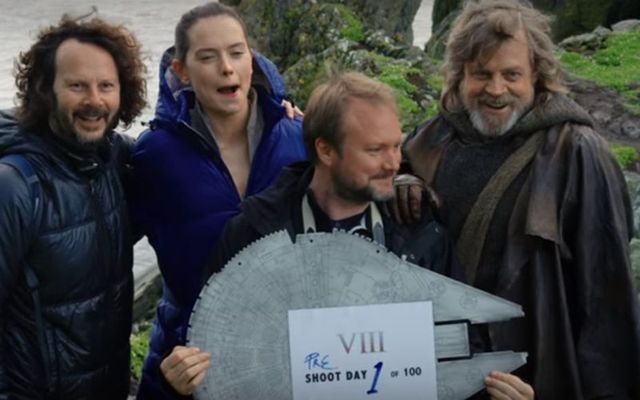 Behind the scenes with Tourism Ireland on the first day of filming of Star Wars: The Last Jedi.

Tourism Ireland today launched phase three of its latest Star Wars campaign ‘trilogy’, targeting fans of the science fiction franchise around the world. It involves a specially-commissioned ‘behind-the-scenes’ film, created during filming here of Star Wars: The Last Jedi in 2015 and 2016.

In the behind-the-scenes film, Mark Hamill praises Ireland’s beauty: “It’s like a fairy-tale world … you just can’t believe your eyes”.

Describing Ireland, director Rian Johnson said: “It’s a gorgeous place. I feel very, very lucky to be able to get it on film”.

“We are extremely grateful to Lucasfilm and the Star Wars team for their tremendous generosity in agreeing to make this wonderful behind-the-scenes film, to help us promote the Wild Atlantic Way and Ireland,” said Niall Gibbons, CEO of Tourism Ireland. “Since its release, Star Wars: The Last Jedi has been breaking box office records everywhere and Tourism Ireland is capitalizing on this positive exposure, highlighting the Star Wars connection with Ireland and bringing the magnificent scenery of the Wild Atlantic Way to the attention of millions of people everywhere.”

Read more: Why Ireland is the ultimate destination for Star Wars fans

Filming on Skellig Michael for Star Wars: The Last Jedi took place over two days in 2015, before moving to the mainland. To continue filming on location here, the crew returned in 2016 and built replicas of Skellig Michael’s sixth-century monastic ‘beehive’ huts on the mainland. The location scouts were so taken with Ireland’s Wild Atlantic Way that locations in counties Cork, Kerry, Clare and Donegal were handpicked to represent the planet Ahch-to in Star Wars: The Last Jedi.

Phase one of Tourism Ireland’s Star Wars campaign ‘trilogy’ was unveiled in early December, in advance the film’s global release. It involved a fun publicity stunt – the first ever tourism campaign in space!

Phase two of the campaign was a fun, irreverent promotional film about holidays along the Wild Atlantic Way, featuring Mark Hamill – aka Luke Skywalker.

Read more: So, is 'Star Wars: The Last Jedi' any good? Wait till you see the Irish scenes