From the growing influence of our fashion bloggers to world-class designers, Ireland has a lot more to offer. 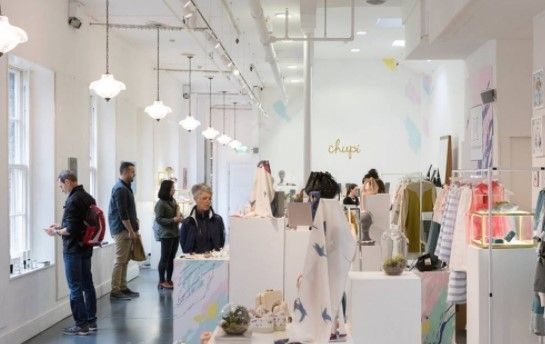 While the locals of any tourist-infested city will find it very easy to pick out the tourist from their fellow countrymen, the task is made all the more easy for Dubliners or residents in many of Ireland’s main cities and towns for the propensity of tourists to Ireland, especially those from the US, to sport a freshly bought Aran sweater, Paddy cap, or indeed a Guinness tee, as they venture around the sights.

Anyone who has also visited any of the newly-opened Primark stores (or Penney’s, as they're known in Ireland) that have sprung up in the past year and a half in Boston, Philadelphia, Staten Island, and New Jersey, are sure to find at least one overwhelmed Irish person trailing cartloads of clothes behind them so happy are they to be reunited with the holy grail of cheap Irish fashion.

If there’s anything to be learned from the growing influence of Irish fashion and beauty bloggers such as Erika Fox, Michaela O’Shaughnessy, Margaret Molloy, and Suzanne Jackson, however, is that there’s a lot more to the Irish sense of style than traditional (although still incredibly comfortable and warm) sweaters or all the cheap as chips clothes you can pick up, never wear, but still be happy you got for a bargain.

As was seen when the Irish Consulate hosted ten Irish designers in the very first NY Ireland Fashion Showcase during New York Fashion Week 2015, Ireland is producing top styles in everything from jewellry to bridal wear, with designers such as Don O’Neill and his design company Theia Couture being a popular choice for Irish women taking to the red carpet for the Academy Awards.

While Grafton Street, O’Connell Street, and Henry Street and their respective shopping malls may just offer up the international brands that can be found in most European or US cities, the New York Times recently picked up on the increasing number of designers establishing themselves in Dublin’s Creative Quarter, a section of parallel streets from Clarendon Street, William Street, to Drury Street (located directly to the south of Grafton Street) where eagar city shoppers can find something different.Temple Bar has become a refuge for not just those looking for a pint but for those looking  hoping to delve through a vintage or thrift store.

Here were their top picks:

Our dreamy store is looking super cute these days. Can't help but document it when we're extra happy with our ever changing collection.

For any fashion lovers, Powerscourt Center should be top of the list during a  trip to Dublin. The Georgian-era mansion holds host to over 40 various stores but among them is [Made] Dublin, an independent concept store opened in 2016.

Curated by Kate Nolan and Chupi Sweetman, the store has abandoned fast fashion to offer up a carefully considered curation of beautiful design, exclusive collaborations, fashion, jewellery, art and culture.

The store also dedicates a corner to Sweetman’s own nature-inspired jewelry company Chupi.

After a lovely couple of days off it's back into the studio to replenish stocks of our #homespun and #lineage jewellery collections @namesdublin Love this photo of our Bláinid earrings styled by @a_crudgie for last Autumn's shoot. A play on the classic large hoop earring but lightweight enough for everyday wear. #irishmade #irishjewellery #namesdublin #workshop #geometric #hoops

Established by jewellers Clare Grennan and Laura Caffrey in 2008, the Irish Design Shop  has a strong focus on Irish heritage crafts selling everything from their own jewellery to cable knits to hot water bottles.

A great stop off for both vintage and  vintage-inspired fashion, Carousel has been based in Dublin city center since 2001. Manufacturing their own vintage-inspired range “Circus”, they focus on affordable clothing using eclectic patterns, vibrant colour, and flattering shapes.

Another store based in Powerscourt Center, MoMuse showcases the jewellry of its owner Margaret O’Rourke as well as stocking other Irish designers such as jewelry designer Merle O'Grady,  cashmere from Eilis Boyle, stationery brands Simple Things Cards, Mucros Journals, and Leaf & Stitch's, as well as Alpaca & Silk Scarves from Killarney.

This Irish-owned boutique was first opened in Cork in 2002 and now owns three stores in various locations. They state that they take pride in “handpicking labels from around the world that are feminine, figure-flattering and modern.”

Be enchanted this #Summer in our beautiful new surroundings! What do you think of our brand new look? #KildareVillage #SomethingExtraordinaryEveryday #explore #Ireland

While you’ll find many of the classic designer stores in the outlet Kildare Village, located just an hour outside of Dublin city, the landscaped grounds and authentic Irish village environment make this a completely different experience to shopping in the US, while offering up to 60% off all year round.

Ti:Amo means I love you. 💕 We can't resist stacking up these amazing Ti:Amo bangles. Bi.-metal designs and birthstones too. This range will add a new dimension to your style! #tiamo #newbridgesilverware #bracelets #contemporaryjewellery #naomicampbell #layering #stacking #braceletstack

A post shared by Newbridge Silverware (@newbridgesilverware) on Apr 7, 2017 at 10:01am PDT

Possibly Ireland’s most famous jewelry, cutlery, and giftware brand is Co. Kildare-based Newbridge Silverware. Stocked in tons of locations around the country, a visit to the showrooms will also allow you to visit the Museum of Style Icons, which hosts numerous collections and artefacts relating to stars such as Audrey Hepburn, Marilyn Monroe, Princess Grace, Princess Diana, Michael Jackson, and The Beatles.

Make sure to get your cute lil selves into @ninecrowstemplebar and @ninecrowsgalway before B&S this weekend! 🌞🌞🌞🌞 All of these pieces are available in our Temple Bar store ❤️ We'll be open all week at both location to get you guys and gals festival ready! www.shopninecrows.com 😄

Based in Temple Bar, Dublin, and Galway, NINE CROWS specializes in handpicked vintage and reworked vintage. They also ship worldwide if you see anything you like but won't be in Ireland any time soon!