Shane MacGowan conjures up his own TikTok fairytale

Shane MacGowan is officially on TikTok, and the Pogues frontman has already amassed a huge audience. 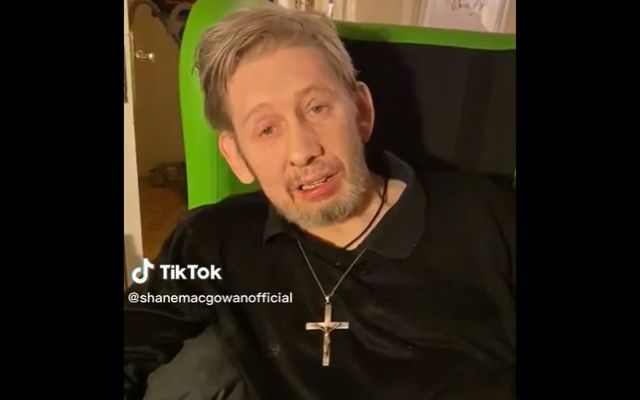 Shane MacGowan in his first ever TikTok video, uploaded on November 28. @shanemacgowanofficial, TikTok

Shane MacGowan, the Irish rabble-rouser frontman of the Pogues, has upped his social media presence by unveiling a new, personal TikTok account.

MacGowan, who also has Twitter and Instagram pages, waded into TikTok this week and has already amassed a huge audience of more than 21k followers.

“Welcome to Shane MacGowan on TikTok,” the Pogues frontman said in his first video, uploaded on November 28.

“I hope you enjoy. God bless.”

The simple video racked up more than 20k likes and 1600 comments in about a day.

MacGowan describes himself as a “Musician, Lover, Irishman," as well as "Mr. Victoria Mary Clarke" on his TikTok bio.

“Nobody would have expected Shane to go viral on Tiktok! He’s enjoying it.”

MacGowan's second TikTok video? A clip of him singing the opening lyrics in the music video for the Pogues' iconic "Fairytale of New York," of course.

In his next TikTok, MacGowan says he's watching the Netflix film "Circus of Books," which he described as "complicated."

On Tuesday, MacGowan uploaded a clip of his longtime pal Johnny Depp, who, speaking at the Karlovy Vary Film Festival 2021, said he has learned to "never, ever try to keep up with Shane MacGowan."

Elsewhere, MacGowan is promoting his new limited-edition art book "The Eternal Buzz and the Crock of Gold," which features six decades of MacGowan's artwork, sketches, and unpublished lyrics, including drawings of Bono and Kirsty MacColl, who featured in the famous Pogues song "Fairytale of New York."

MacGowan told IrishCentral in March that he drew inspiration from violent Hollywood movies, religion, Irish republicanism, immigration, and sex. Art critic Waldemar Januszczak claims in the book's introduction that readers would probably see "the world record broken for the most fellated penises in one tome."