Friends, family, and fans were in attendance as MacGowan launched "The Eternal Buzz and the Crock of Gold" at the Park Cafe in Dublin on Tuesday, November 8. 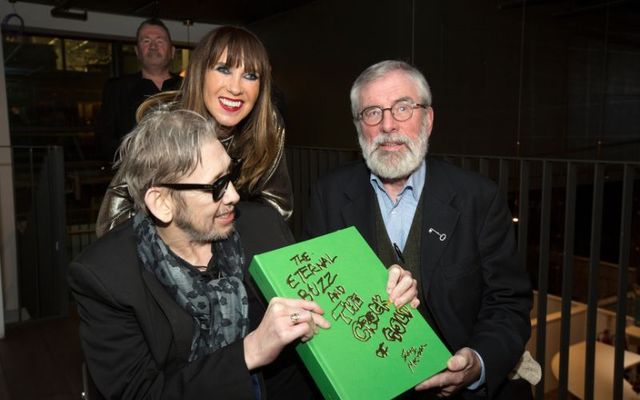 Friends, family, and fans were in attendance as MacGowan launched "The Eternal Buzz and the Crock of Gold" at the Park Cafe in Dublin on Tuesday, November 8.

The book features six decades of MacGowan's artwork, sketches, and unpublished lyrics, including drawings of Bono and Kirsty MacColl, who featured in the famous Pogues song "Fairytale of New York".

MacGowan's wife Victoria Mary Clarke told IrishCentral in March that she found 3,000 old sketches, drawings, and unpublished lyrics and stories stashed away in a box in her mother's attic during Covid-19 lockdown and set about painstakingly piecing them together into a cohesive narrative.

Adams added that Ireland was "lucky" to have someone as talented as MacGowan, describing the Pogues frontman as a genius.

"Ireland and our culture is lucky that we have Shane MacGowan to bring us his wonderful art and music, him and The Pogues, and his wonderful songs, works of a genius," Adams said during Tuesday's launch.

Irish actors Patrick Bergin and Peter Coonan also read out some of MacGowan's unpublished lyrics during the launch in Dublin,

MacGowan told IrishCentral in March that he drew inspiration from violent Hollywood movies, religion, Irish republicanism, immigration, and sex, with art critic Waldemar Januszczak claiming in the book's introduction that readers would probably see "the world record broken for the most fellated penises in one tome".

Januszczak writes that eccentric musicians often become mundane when they delve into the artistic world, forgetting their rebellious side and becoming "all respectable on us". Not Shane MacGowan, though.

"Whichever way you twist him, he will never be anything other than a wild Irish drinking rebel with the alcohol-rich waters of Rain Street running through his pin-cushioned veins," Januszczak wrote.

"I am very grateful to Shane for allowing us to show his dirty laundry," Clarke joked during the launch.

Described by Clarke as a "diary that comes to life", the Eternal Buzz and the Crock of Gold provides a visual backdrop to MacGowan's eccentric career.